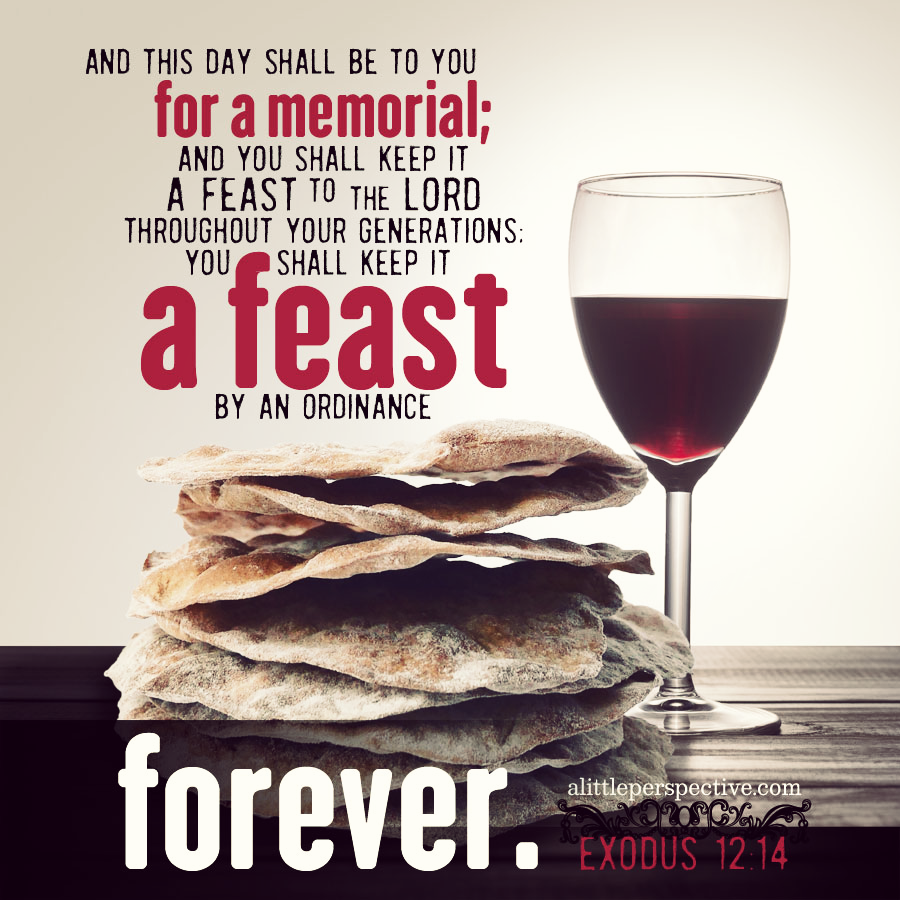 The entire 10th plague is the most well- known Messianic prophecy in the Old Testament. In the beginning of YHVH’s contest with Pharaoh, before Moses performed any signs or any plagues had come upon Egypt, YHVH instructed Pharaoh:

“Thus says the LORD: Israel is My son, My firstborn. So I say to you, let My son go that he may serve Me. But if you refuse to let him go, indeed I will kill your son, your firstborn.” Exo 4:22-23

Of course we know that Jesus is the Son of God! Here we see Israel as a type of Messiah, just as Isaac was, and just as Joseph was. Israel is also the one nation on the earth who served and worshiped YHVH – they were and are His people. He delivered them from bondage in Egypt. He did not deliver them from service, but from service to the Egyptians to service to God, just as He has delivered us from bondage to the kingdom of darkness, to service and worship in the kingdom of His dear Son.

Exo 12 contains the instructions for how this deliverance for Israel was to be accomplished:

Mat 21 records Jesus’ triumphal entry into Jerusalem. In the church, we commemorate that day as Palm Sunday. But in the year that Jesus was crucified, it was the tenth day of the first month. Then the questions from the chief priests and authorities commenced, daily, through which He was shown to be a Lamb without blemish.

3) The lamb’s blood shall be applied to the doorposts and lintels of the houses:

“Now the blood shall be a sign for you on the houses where you are. And when I see the blood, I will pass over you; and the plague shall not be on you to destroy you when I strike the land of Egypt.”  Exo 12:13

The blood of Jesus is a sign for us – when YHVH sees the blood upon us, He will pass over us, and death shall not be on us to destroy us, as death is on the kingdom of darkness, and all who are enslaved to that kingdom, to destroy it!

I find it instructive, knowing that Torah is a book of history- prophecy (see the teaching tools of scripture), that the blood was applied to the doorposts of households by the fathers, and all who were within that household were saved from death, by the action of the head of that household. Now I believe that God saves individuals by the blood of Jesus, and each person must make their own decision for the Lord Jesus Christ. But when the blood is applied to the household by the father, the children are painted with a target on their spiritual heads, who then are pursued by the great Hound of Heaven (my opinion)! And is He a skillful Hunter!

Then the children of Israel journeyed from Rameses to Succoth, about six hundred thousand men on foot, besides children. A mixed multitude went up with them also, and flocks and herds — a great deal of livestock. Exo 12:37-38

Who is the mixed multitude who went up with the children of Israel? I believe they were any who were in Egypt, whether slaves from other nations, or Egyptians themselves, who had learned through the course of the plagues, who YHVH was. They had learned to fear the word of the LORD (Exo 9:20). Egypt was destroyed as a nation by this series of plagues (Exo 10:7). There were those whose families were gone, whose livelihoods were gone, whose future in Egypt was gone, who threw their lot in with the Israelites. Thus YHVH’s command to Moses:

“One Law shall be for the native- born and for the stranger who dwells among you.” Exo 12:49

It had always been YHVH’s goal, through the witness of the one nation of Israel, to bring all the other nations out from the bondage of lies that paganism and idolatry kept them in, to restore them also to His worship and service. Therefore the instruction YHVH gives to Moses, recorded in Torah, is not only for the native- born, but for all who have joined themselves to the God of Israel through Israel’s witness (see one torah for the one people of the one God).