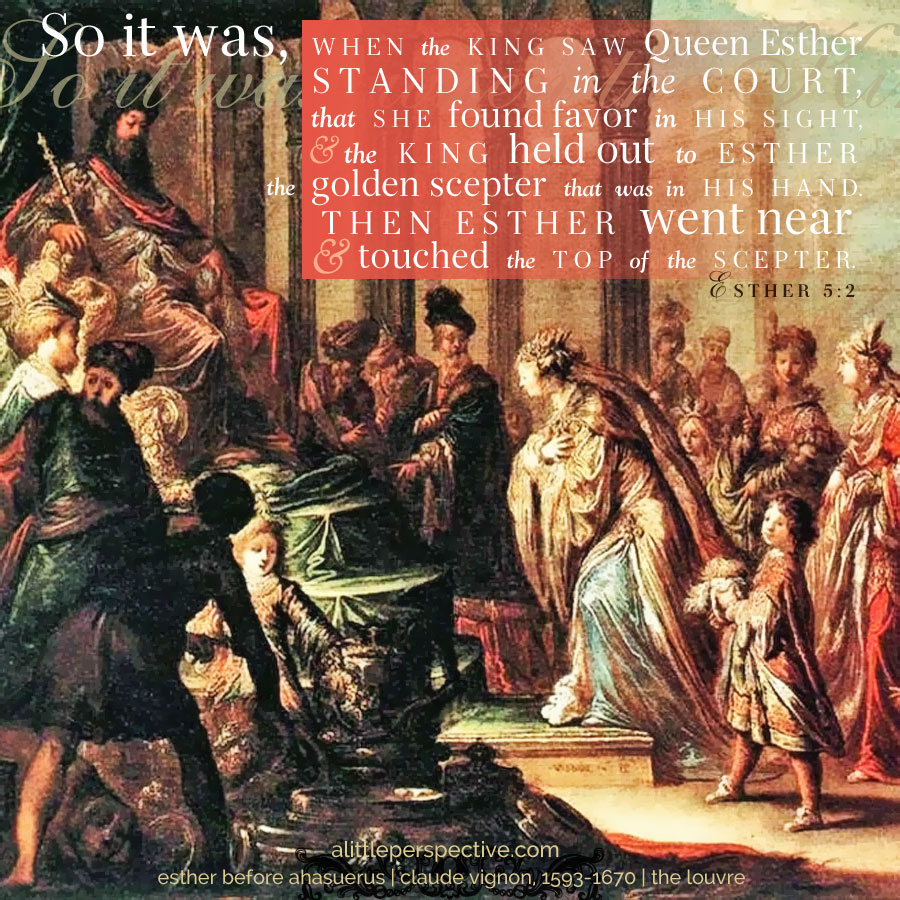 Read Esther 5 and 6 at Bible Gateway.

1a) Est 4:8-5:8, Mordecai’s request/ Esther prepares to petition the king for her people;

1a) Est 5:1a, Now it happened on the third day that Esther put on her royal robes;
1b) Est 5:1b, And stood in the inner court of the king’s palace across from the king’s house;
central axis) Est 5:1c, While the king sat on his royal throne in the royal house;
2b) Est 5:1d-2a, Facing the entrance of the house/ When the king saw her standing in the court;
2a) Est 5:2b, That she found favor in his sight/ he held out to Esther the golden scepter;

2a) Est 5:2-8, Esther petitioned the king to come with Haman to her banquets;

1a) Est 5:9a, Haman went out that day joyful and with a glad heart;
1b) Est 5:9b, But when Haman saw Mordecai in the king’s gate, that he did not stand or tremble before him, he was filled with indignation against Mordecai;
central axis) Est 5:10-12, Nevertheless Haman restrained himself and went home, and he sent and called for his friends and his wife Zeresh. Then Haman told them of his great riches, the multitude of his children, everything in which the king had promoted him, and how he had advanced him above the officials and servants of the king. Moreover Haman said: Besides, Queen Esther invited no one but me to come in with the king to the banquet that she prepared; and tomorrow I am again invited by her, along with the king;
2b) Est 5:13, Yet all this avails me nothing, so long as I see Mordecai the Jew sitting at the king’s gate;
2a) Est 5:14 {s} His wife + friends suggested a gallows upon which to hang Mordecai/ it pleased him to do so;

1a) Est 6:4a, The king: Who is in the court?/ Haman had just entered the outer court;
central axis) Est 6:4b, To suggest that the king hang Mordecai on the gallows that he had prepared;
2a) Est 6:5, The servants: Haman is standing in the court/ The king commanded his entry;

1a) Est 6:6a, Haman came in/ king: What shall be done for the man whom the king delights to honor?
central axis) Est 6:6b, Haman thought: Whom would the king delight to honor more than me;
2a) Est 6:7-9, Haman’s answer of royal robe, horse, parade suggesting extravagent honor;

1a) Est 6:10, King: Do so for Mordecai the Jew in the king’s gate; leave nothing undone;
central axis) Est 6:11, So Haman took the robe and the horse, arrayed Mordecai and led him on horseback through the city square, and proclaimed before him, “Thus shall it be done to the man whom the king delights to honor!”
2a) Est 6:12a, Afterward Mordecai went back to the king’s gate;

As Darius the Great’s predecessors on the throne, Cambyses and Smerdis, Cyrus’ sons, did not die natural deaths but were murdered, Darius, by instituting this decree about being summoned, was discouraging potential murderers from drawing near to his person.

So Esther faced death, and was willing to lay down her own life, in order to intercede to the king on behalf of her people, in order to save them. Self- sacrifice to save God’s people is a sign of Messiah in Scripture. When the king held out his scepter, her death sentence was lifted. We have seen in Torah and throughout Scripture, that miraculous deliverance from certain death is a type of resurrection, and is a sign of Messiah. Furthermore, we find the number three, as she and all the Jews fasted for three days in prayer, before she undertook her dangerous mission. She was in fact, “resurrected” on the third day. The number three is another sign of Messiah.

So, this is surprising. Here in a seemingly tacked on historical book, wherein God is not mentioned at all, we find a Messiah type and the antimessiah type. The antimessiah is represented in Amalek’s descendant Haman and the age old work of the antimessiah, the planned annihilation of God’s people. And we find multiple signs of the Messiah in Esther’s mission to intercede for her people’s salvation before the king.

In fact, I believe the history of Esther is a counterpart, a matching pair in a chiastic structure of the history of Israel recorded in Scripture, to the history of Joseph. The basic outline is a savior of the people is destined within someone unlikely: a youth, a woman. They do not discover their calling in their own country, but living in a Gentile nation. They are found in a lowly station in life. They are raised to rank, as helpers to the Gentile king, through favor and gifts which are bestowed on them by God. They realize that God prepared their high position, not for their own ease or comfort, but to save the people of God from certain death.

This is history that prophesies, and we are seeing it played out again on the stage of history in our lifetimes, probably for the final time. Haman is once again setting the stage for the annihilation. The Gentile kings are being lured in as unwitting participants. Real intrigue and danger accompany all that His people do to counter the chess moves of the enemy, directed by His Spirit. But, God has prepared His Savior, and deliverance for His people will arrive from His quarter!