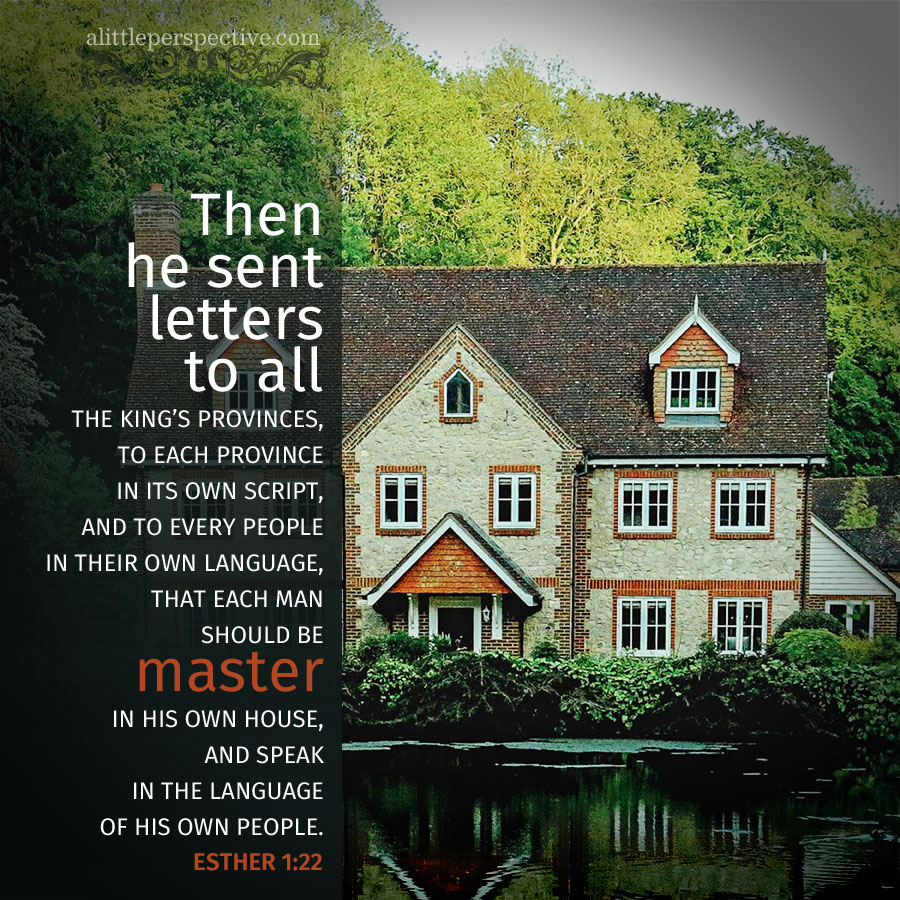 Read Esther 1 and 2 at Bible Gateway.

Est 1:1-8 {s} King Ahasuerus’ great feast for the nobles of Persia + residents of Shushan the capital
Est 1:9-12 {s} Queen Vashti’s feast/ she refused to come to the king when he commanded
Est 1:13-15 {s} The King sought his wise men: what does the law require for Vashti who did not obey
Est 1:16-22 {s} Vashti deposed from being queen/ the King decreed every man master of his own house
Est 2:1-4 {s} The beautiful young virgins of the empire gathered/ the King to choose his new queen
Est 2:5-20 {s} Esther favored among the virgins/ the King delighted in her + made her his queen
Est 2:21-23 {s} Mordecai discovers a plot against the King/ it is investigated, they are hanged

1a) Est 1:1-8 {s} King Ahasuerus made a great feast for all his officials/ royal wine in abundance according to the generosity of the king;

1b) Est 1:9-11, Queen Vashti/ the king commanded Vashti to come, that he might show off her beauty;

central axis) Est 1:15 {s} “What shall we do to Queen Vashti, according to law, because she did not obey the command of King Ahasuerus brought to her by the eunuchs?”

2d) Est 1:16-22 {s} They replied: the queen has wronged both king and people, because she set an example of contempt for the women of the kingdom/ let the king give her royal position to another better than she;

2c) Est 2:1, When the wrath of King Ahasuerus subsided, he remembered Vashti, what she had done, and what had been decreed against her;

1a) Est 2:2-4 {s} Let beautiful women be sought/ the woman who obtains the king’s favor shall be queen;
1b) Est 2:5-7a, Mordecai, a Jew descended from the captives, brought up Hadassah his uncle’s daughter;
1c) Est 2:7b, For she had neither father nor mother;
central axis) Est 2:7c, The young woman was lovely and beautiful;
2c) Est 2:7d, When her father and mother died;
2b) Est 2:7e, Mordecai took her as his own daughter;
2a) Est 2:8-17, Esther obtained favor in the sight of the king/ he made her queen instead of Vashti;

2a) Est 2:18, The king made a great feast for all his officials/ gave gifts according to the generosity of a king.

Now it came to pass in the days of Ahasuerus (this was the Ahasuerus who reigned over one hundred and twenty-seven provinces, from India to Ethiopia), in those days when King Ahasuerus sat on the throne of his kingdom, which was in Shushan the citadel, that in the third year of his reign he made a feast for all his officials and servants—the powers of Persia and Media, the nobles, and the princes of the provinces being before him— when he showed the riches of his glorious kingdom and the splendor of his excellent majesty for many days, one hundred and eighty days in all. Est 1:1-4

Ahasuerus among the Persians, was a title of the king, meaning “lion king;” it is not a personal name. It was very common in the ancient world for the kings to be known and named by their titles rather than their personal names. Thus “pharaoh” is a title among the Egyptians, that means, “voice of the sun god.” “Abimelech” was a title among the Philistines, that means, “father king.” (This is why both Abraham and Isaac had dealings with Abimelech: they were not the same man, but both men were kings of the Philistines who were known by their title).

The Scripture itself witnesses that Ahasuerus is a title and not a personal name, for when the king is introduced, in the first verse of Esther, he has to be distinguished from the other kings of Persia who also bore that title, by identifying details of his reign.

As to those details, the first king of Persia to reign from India to Ethiopia, was Darius the Great. The other details of his reign also fit: we learn that he threw a great banquet for his nobles in the third year of his reign. Why not the first year of his reign, when he became king, to celebrate his coronation? His ascension was contested, and he dealt with rebellions in many places. His authority was only secured after he had successfully quelled the revolts within his kingdom. He threw the great feast when he had been established as uncontested king of Persia.

Most Bible commentaries say that Esther’s king Ahasuerus was Xerxes, not Darius the Great. I don’t agree. If you take the authority of Scripture as your plumb line for true history, the details of Esther’s king fit Darius, not his son Xerxes, for some of the reasons we have discussed, among others. Why do the commentaries say, then, that he was Xerxes? The timeline that has been constructed for the ancient world, which modern scholars have agreed upon, places Xerxes at the right time for the timeline of biblical chronology that has been decided for Esther. That is the entire reason.

Incidentally, the great biblical chronologers, such as Ussher, who are out of favor with modern scholars and historians because they held the authority of Scripture absolute in the chronology of ancient history, also believed Esther’s king to be Darius the Great. Telling.

The Greek historians say that Darius married a daughter of Cyrus to cement his claim to the throne. It is likely that this was Vashti. It would explain, furthermore, her refusal to come when called. If she grew up, a princess of Persia, with her father the great Cyrus,  she would naturally think of herself as royalty, socially at the top of the food chain. Darius had been a nobleman who was elected among the council of seven to serve as king, in replacement of Cyrus’ sons (her brothers), who went mad or were murdered.

But perhaps she was suspect of her new husband and his role in her brothers’ deaths. Perhaps she meant to drive the point home, who she was, and who he was, lest he forget it. The possibility that she would be set aside never even entered her head, I would guess — as would be the case with the royal daughter of the great Cyrus. The other scenarios simply do not make sense: a normal woman under normal political circumstances would not be so haughty or bold as to defy the authority of the greatest king living at that epoch.