You are here: Home / Home / on husbandry / cats and litter boxes 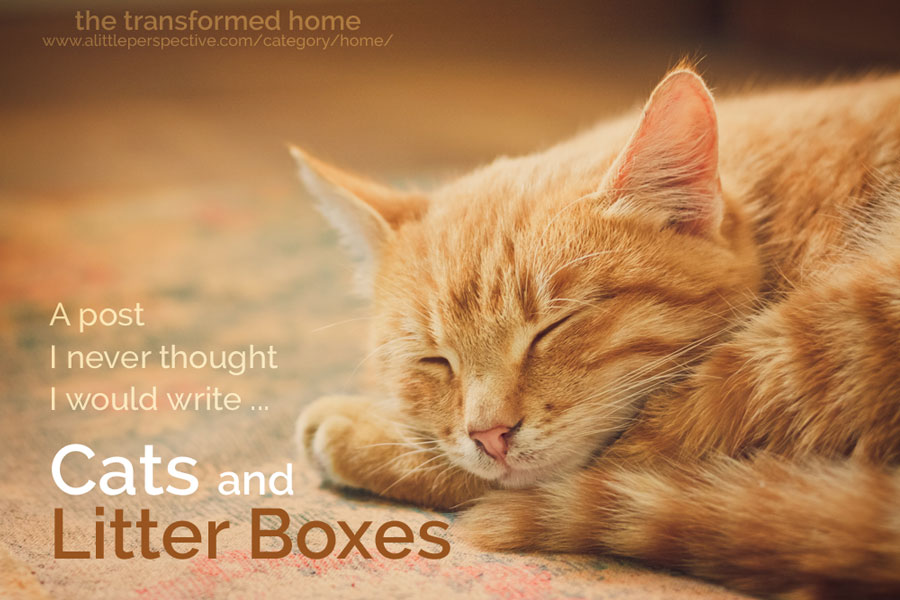 We adopted a four- year- old yellow tabby from a rescue shelter a few months ago. Now, we have always owned a cat. But we have been cat- less since relocating to Florida five years ago. I finally couldn’t take it any longer, and my daughter and I found a beautiful yellow tabby just waiting for a home, so we gave her one. Ours. ♥

Previously, we had always started with kittens. This was our first time adopting an adult cat. I had no idea we would be in for such a rough ride with litter box issues integrating this box- trained cat into our household.

Of course, coming to a new and unfamiliar place with new and unfamiliar people can be traumatic for an adult cat. The shelter people told us she had been bullied by the other cats in her pod. We think she might have been bullied in her previous home also. It took weeks of patient love and attention to ease her from hiding under the bed all day, cowering and flinching when petted, or jumping and running at every little noise. Today she is so much calmer and at peace. ♥

She did not use the litter box at first, and it has been a journey to train her. This is what we have learned.

We realized that she had been used to going outside in her previous life. Her little accidents were always in front of doors. She was getting as close to the outside as she could. The Lord helped me see this the day after I prayed to Him, “Father, I don’t know what our new kitty’s problem is, but You do. Help me to understand.” You see, she wasn’t trying to be difficult or punish anyone. She was using her best kitty logic to resolve her problem of where to go. It was traumatic enough for her to get used to a strange place and strange people, and to feel like she belonged. That was her root issue. Being angry with her or punishing her will not address her root issue. Treating her with patience, kindness, and consideration did address her root issue. Once she trusted us and began to feel she belonged here, we made good strides in the battle of the litter box.

Once the cat has gone outside the litter box, even after cleaning up, that same area retains its “this is the place to go to the bathroom” scent to the cat. Cats are creatures of habit, and will return to that place as long as the scent is there. Just because you cannot smell it does not mean they cannot.

Our floors are wood laminate and easy to clean, thank goodness. After cleaning up after the cat, we washed the area with bleach to kill germs. Then we washed it again with this odor neutralizing solution (Thank you for the recipe, Whole Lifestyle Nutrition!):

Mix up fresh each day you need to use this. I have read this same solution can also be used on carpet or upholstery – just test your fabric first to be sure. If the area still retains a faint odor, wash again with the odor neutralizer until all the odor is neutralized.

We used a cat and kitten repellent spray (available at the local pet store) to treat the area after washing and neutralizing. This really does work to make that area seem off limits to the cat.

Doing the above helped discourage our cat from returning the same spot outside the litter box. But that is only half the equation. Now we needed to help her go to the litter box.

We learned our cat does not like scented litter. Most litters readily available these days are scented. We hunted and kept changing the litter until we found one she liked. How do we know she liked it? She started using the litter box!

We added the recommended amount of litter attractant (local pet store, those folks are a wealth of information) to our cat’s litter every time we cleaned her litter box. It makes the litter smell like a freshly dug garden, actually a pleasant scent, which says to the cat, “this is a perfect place to go!”

We observed she tended to go at about the same time every day. When that time of day approached, we put her in the room with the litter box (our laundry room) and closed the door. She cried at first. But then when nature called, well, she was right there next to the litter box, and began using it. We let her out when she had done her business. We still put her in the laundry room at that time of day, and close the door, but she is in and out in a few minutes, and it is no big deal for her.

Perhaps it should go without saying, but we cleaned our cat’s litter box morning and evening, daily. Cats like a clean bathroom as much as people do. 🙂

If all else fails, a trip to the vet would not be amiss. Sometimes litter box issues are caused by a physical problem.

It took us some trial and error to hit upon what worked for us. Hopefully this will help others win their battle of the litter box.