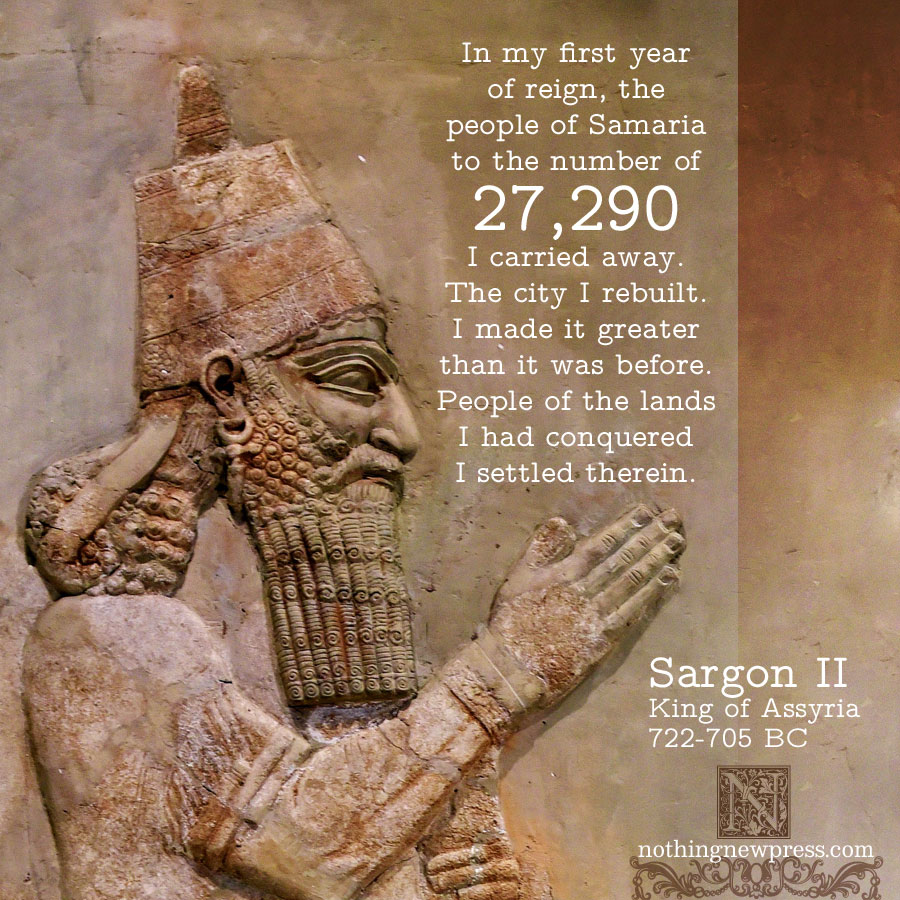 The next oldest copy of the Hebrew Testament, outside of the traditional transmission previously discussed, is the Samaritan Pentateuch.

The Samaritans came to dwell in Samaria when they were planted there by Sargon II, king of Assyria, who completed the capture of Samaria begun by his predecessor Tiglath-pileser, and carried the native Israelites away captive. From the inscription of his first regnal year:

In my first year of reign *** the people of Samaria *** to the number of 27,290 … I carried away. Fifty chariots for my royal equipment I selected. The city I rebuilt. I made it greater than it was before. People of the lands I had conquered I settled therein. My official I placed over them as governor.

That the land should not be desolate, he brought people of other nations whom he had conquered to dwell in northern Israel in the place of the native Israelites.

And the king of Assyria brought men from Babylon, and from Cuthah, and from Ava, and from Hamath, and from Sepharvaim, and placed them in the cities of Samaria instead of the children of Israel: and they possessed Samaria, and dwelt in the cities thereof. 2 Kin 17:24

Of course the new inhabitants knew nothing of the covenant of Israel and the Torah given to them by Moses, or any of the history of the land, of Abraham, of Moses, of David, of Solomon, or even of any of the kings from Jeroboam on which had forsaken the Lord. They maintained their own idolatrous observances which they brought with them from their native lands.

It is from this date that the Samaritans maintained their own copy of the Torah, and of the Torah only, for they do not allow the authority of any of the other Hebrew Scriptures, neither the histories, nor the Psalms, nor the wisdom books, nor the prophets, unlike Yeshua or the first apostles; nor, for that matter, the treatises of the rabbis. As for their manner of worship once they received the Samaritan Torah:

However every nation made gods of their own, and put them in the houses of the high places which the Samaritans had made, every nation in their cities in which they dwelt. And the men of Babylon made Succoth-benoth, and the men of Cuth made Nergal, and the men of Hamath made Ashima, and the Avites made Nibhaz and Tartak, and the Sepharvites burnt their children in fire to Adrammelech and Anammelech, the gods of Sepharvaim. So they feared the Lord, and made for themselves, of the lowest of them, priests of the high places, which sacrificed for them in the houses of the high places. They feared the Lord, and served their own gods, after the manner of the nations from which they had been carried. To this day they do after their former manners: they fear not the Lord, neither do they do after the statutes, or after the ordinances, or after the law and commandment which the Lord commanded the children of Jacob, whom he named Israel; 2 Kin 17:29-34

Why does the history say, they feared the Lord, then, they feared not the Lord? Because they added the requirements of the service and worship of the Lord as commanded by Moses, to the umbrella of their worship, except for the foundational requirement to serve the Lord only, forsaking all others. But at some point in their history the Samaritans forsook their native idolatry for the sole service of YHVH, according to the Samaritan Pentateuch that they have maintained.

A new English translation of the Samaritan Pentateuch has just been published (ISBN 0802865194). Its description at amazon dot com reads:

This landmark volume presents the first-ever English translation of the ancient Israelite Samaritan version of the Pentateuch, or Torah. A text of growing interest and importance in the field of biblical studies, the Samaritan Pentateuch preserves a version of the Hebrew text distinct from the traditional Masoretic Text that underlies modern Bible translations.

Just how variant is it? The new English Samaritan Pentateuch cites 6000 places of disagreement between the Samaritan and the Masoretic, of which half are spelling and pronunciation variants. The other half are narrative variants which often add text it claims the Masoretic has dropped. Please see The Other Torah by Chavie Lieber for a more complete discussion.

But what I find interesting is that in 1669, the Near Eastern languages scholar Edmund Castell produced an edition of the 1657 London Polyglot which corrected the Samaritan, Syriac, Arabic, and Ethiopic text of the Scriptures previously published. The London Polyglot was a parallel text Bible, not in English, but of the original Hebrew, Greek, and other languages mentioned, with the Latin translation. Based on the corrected London Polyglot, Dr. John Jahn, doctor of philosophy and theology, and professor of the oriental languages (that is, Near Eastern) at the University of Vienna, the acknowledged expert in the subject in his generation, wrote:

The author and date of the Samaritan version are unknown, but it is certainly much older than the 7th century; perhaps it belongs to the 3rd or 4th. It follows the Hebraeo-Samaritan text word for word, except that sometimes, especially where the Deity is represented with human form or passions, or where appearances of God are mentioned, it renders the name of God by the angel of God; this peculiarity does not … belong to the Samaritans alone, for it occurs also in the Arabic version of the Jew Saadias Gaon, [Gaon or Haggaon is not a proper name, but a title of honour, equivalent to excellent, illustrious, applied to the masters of the schools of Babylon. See Bartolocci, Biblioth. Rabbin. P. III. p. 668.] and is almost the same with the מ’מרה ד’הוה of the Chaldee paraphrases. The changes of the guttural letters, which frequently recur, are not various readings, but errors of transcription, arising from the circumstance that the Samaritans do not pronounce those letters. Frequently two readings of a single passage are given. The various readings of this translation were published by Castell in the 6th volume of the London Polyglot (1669).

In 1669 the Samaritan followed the Hebrew virtually word for word, and today there are 3000 narrative changes, supplying “missing” information from the Masoretic. The question is, when did the change occur?

Referring to a principal of textual criticism called lectio difficilior potior, which states that a harder reading of a text is preferred to an easier reading, Yeshiva University’s Aaron Koller said some scholars believe the Samaritan Torah’s text, which presents fewer interpretive problems, proves that it had been tampered with. “Some scholars believe someone took an original version of the Torah and simplified it to the Samaritan version,” he explained. “It’s hard to believe a difficult reading of a text is original, because why would someone change a text to make it unclear? Rather, when a text is simplified, it’s easier to believe that the text was altered in order to make it simpler. Outside of the Samaritan community, most believe the Samaritan Torah was an editorial revision of the Masoretic text.”

Aaron Koller, citied in The Other Torah by Chavie Lieber

Summary: Both the Hebrew Masoretic text of the Torah which we have today, and the Samaritan Pentateuch text, were copies from the same original.

an accurate copy of scripture: the septuagint 2019 aug 08