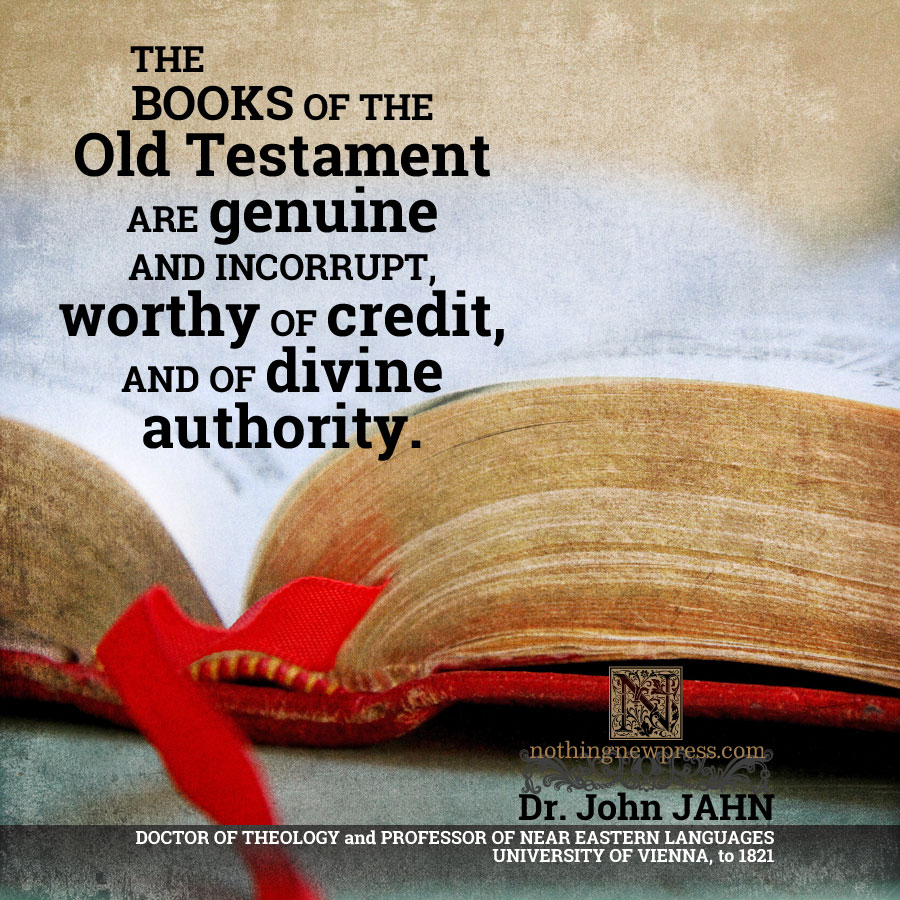 By way of review, we are examining three acknowledged copies of the original Hebrew autographs of Scripture, written by Moses, the Prophets, and the other authors represented in the Hebrew Testament.

For some time before the introduction of Christianity, [those who professed] the Mosaic religion had been divided into three distinct and independent communities. Each of these had a temple as the centre of their worship; a recognized copy of the Holy Scriptures in their own language; and each regarded the other two with feelings of the most rancorous jealousy. These were, 1. The Hebrew Jews, who worshiped at Jerusalem, and who are generally supposed to have used the square characters [Chaldean, introduced by Ezra] of the present Hebrew Bible. 2. The Samaritans, whose temple was situated on Mount Gerizim, who used a Syriac dialect with Phenician characters [that is, paleo-Hebrew]. 3. The Hellenistic Jews of Egypt, whose usual language and characters were Greek. They had their temple at Heliopolis.

See the Hebrew Testament and Samaritan Pentateuch for the discussion of the first two copies. In the third century before Messiah the Hebrew Scripture was gradually translated into Greek. Its history is disputed, but the best authority relates:

Aristaeas, an author who pretends to be a Gentile, praefect of the body guards of the king of Egypt, relates in a letter addressed to his brother Philocrates, that Ptolemy Philadelphus, at the instance of Demetrius Phalereus the keeper of his library, obtained from Eleazar the high priest of the Jews, by means of magnificent presents, seventy-two interpreters, who in the palace of the isle of Pharos, after mutual conferences and consultations, translated the books of Moses from the Hebrew into Greek, whence their version was called, in round numbers, the version of the Seventy interpreters [the Septuagint]. This account, repugnant as it is to historical truth, and contradictory in itself, has been copied from Aristaeas by Josephus, Ant. Jud. XII. ii. 1— 15, and by Eusebius, Praef. Evang. VIII. ii— v. p. 350—365. By the oral traditions, on which Philo, Justin, and Epiphanius have relied, it was exaggerated to such an extent, that the interpreters were transformed into inspired writers.

Upon comparison with the history of those times, the following appears to be all that is true in the narration. The Jews, who were carried by Ptolemy Lagus into Egypt 320 years before Christ, together with those who voluntarily accompanied them thither, having become accustomed to the use of the Greek language, a Greek version of the sacred books, and especially of the Pentateuch, became necessary, and seems to have been accomplished by some translator attached to a synagogue. Plutarch informs us, Reg. et Imperat. Apothegm, p. 124. Opp. Vol. VIII. ed. Hutten, that Demetrius Phalereus advised Ptolemy Lagus (in whose reign Ireneus and Clement of Alexandria say the version was made) to read authors on political subjects, because they, although dead, utter truths to kings which living men are afraid to speak. Hence, perhaps, it happened that Ptolemy requested of the Synagogue a copy of their Greek translation of the Laws of Moses, and placed it in his library. This version of the Pentateuch must therefore have been made in the interval of time which elapsed between the year 298 B. C, in which Demetrius Phalereus fled to Ptolemy Lagus, and the year 285 B. C, in which Ptolemy Lagus ceased to reign. The connexion of the number 70 with the name of the version, may have originated in its being revised and approved by a council of 70 learned men [i.e., the Sanhedrin]. The other books were subsequently translated by different Jewish writers, as plainly appears from the variations in the orthography of proper names, from the difference in the mode of translating, and from the degree of learning manifested by the translators, which varies in almost every book. That they were Egyptian Jews is shown by the occurrence of several Egyptian words. In fine, that all the books were translated in the third century before Christ, is intimated by the translator of Ecclesiasticus, who in the close of the third, or at latest in the second century before Christ, in his preface assumes as a well-known fact, that all the Hebrew books had, during some time, been translated into Greek.

From 280 B. C. to the end of the first century, the Hebrew and Greek numbers were identical, and … both were then the same as we have them now in the Septuagint.

The charge is that after the age of the apostles, the chronology was deliberately changed by the Jewish copiers of the Hebrew Scriptures, to diffuse an argument for the coming of Messiah which the Christians, by the Greek copy which they had, used to confound the Jews with proofs from their own Scriptures.

When the Greek Jews made the Septuagint version, in the reign of Ptolemy Philadelphus, they seem not to have been content with the very moderate antiquity for their nation and the human race given in the Hebrew books; and accordingly, they added 1466 years to the age of the world, by making the patriarchs older at the birth of their sons. Thus they add 586 years in Genesis v.-vii., and 880 in Genesis xi., xii. They probably meant to add an exact Egyptian cycle of four times 365, or 1460 years. The difference of six years may be an error of the scribe. On comparing the Greek chronology with the Hebrew, sound criticism will certainly lead us to conclude that the Hebrew is what the writers originally wrote. However mistaken we may think them in supposing that the world had only been peopled with mankind for such a small number of years, yet we cannot accept the Greek chronology as the original. It is evidently a correction, an attempted improvement on the Hebrew.

According to the Encyclopedia Britannica, it was by the request of this same Ptolemy that Manetho wrote his Egyptian history, upon which the whole history of the ancient world is today based. Likewise, in the same era, Berosus wrote his Chaldean history for Antiochus I, the Syrian king. Ptolemy and Antiochus were not Egyptian and Syrian, respectively, but Macedonian Greek, descendants of those generals of Alexander the Great, to whom he entrusted his vast empire on his death bed, in regency for his son. His son was murdered after his death, and the generals made themselves kings, and founders of new dynasties in their regions.  It is a fact of history that Antiochus and Ptolemy were in a macho contest for the kingdom which could boast the greatest antiquity, and Berosus for Antiochus and Manetho for Ptolemy introduced their histories with greatly exaggerated lengths of years in their primal eras. I can well believe, that in comparison, the Hellenic Jewish translators of the Septuagint felt the shame of their truthful but modest years; and undertook an edit in a translation, seeing it as a change of little consequence in the grand scheme of things. I have a much harder time believing that the Soferim would attempt such a change in the original Hebrew centuries later.

Every book [of the Hebrew Scriptures] must be considered as incorrupt until the contrary is proved. We therefore demand from the opposers of these books clear and indubitable instances of corruptions. Such however have not been given either by those of the [Church] Fathers who have accused the Jews of corrupting the [traditional Hebrew] Old Testament, or by those modern theologians who have espoused the same opinion.

The Fathers— 1) believed the Alexandrine version [i.e., the Septuagint] to have been made by men under the influence of divine inspiration and perfectly to accord with the genuine Hebrew text. Whenever therefore the Jews cited any thing from the Hebrew text in words differing from that version, they asserted it to be a corruption of the true text, and in this manner decided in a cause to judge of which they were utterly disqualified by their ignorance of Hebrew.

Hence, 2) the specimens of corruptions which they adduce, have no bearing on the subject; being nothing more than different versions of the same words, sometimes better, sometimes worse, sometimes of equal value with those which they approved; or various readings, generally of little moment.

Nor 3) do they all agree in urging this charge against the Jews. Origen, who was skilled in Hebrew, acquits them of it; and Jerome, although he generally consents to the accusation, yet when he speaks seriously, defends the sincerity of the Jews, and refers to Origen as his authority.

And even 4) those Fathers, who in their disputes against the Jews charge them with corrupting the Old Testament, are not always consistent; for several of them in treating of other subjects speak of the Jews as faithful guardians of the sacred books, as if they had forgotten what they had elsewhere asserted in their controversies with those same Jews.

The modern scholastics who join in this accusation of the Jews, 1) being generally ignorant of the Hebrew language, take upon themselves the office of judge without possessing the proper qualifications; or 2) if more learned, confound errors and interpolations with corruptions; or 3) lastly, being led astray by too much zeal, suppose that they cannot better defend the Vulgate Latin version from the objections of Protestants than by aspersing the integrity of the Hebrew text on which alone the latter place reliance. Comp. Du Pin, Diss. Prelim. I. iv. 4. p. 145-154. [On the Canon, p. 146. ss.]

The Christian church generally, however has not sanctioned the accusation against the Jews as is evident from its proceedings in all ages. In the second century it received the Greek versions, which were derived from the Hebrew text; the version of Daniel by Theodotion was even used in public worship. In the third century the Hexapla of Origen, in which the Hebrew text was twice copied, was approved of, and even the Alexandrine version altered to agree with it; and further, this correction of the Greek version of the Hebrew text, was used in public worship by the churches of Palestine. In the sixth and seventh centuries the Latin church adopted the version of Jerome, made immediately from the Hebrew, which was again, in the end of the eighth or beginning of the ninth century, by Alcuin, and afterwards in the sixteenth century, by the theologians under the inspection of Sixtus V. and Clement VIII., partially corrected by a comparison with the Hebrew text. These facts abundantly prove that the untarnished integrity of the Hebrew text has been acknowledged in all ages.

The instances of supposed corruptions by the Jews, which have been advanced in modern works, are errors in various readings, with perhaps the single exception of Deut. 27:4, where the Jews seem to have altered one word for the purpose of depriving the Samaritans of the argument in defence of their establishment of a temple and place of worship in Mount Gerizim. For an account of the other instances which have been alleged, see Einleit. Th. I. § 14. S. 65, and § 149-151 S. 521-538.

It is simple to demonstrate which [chronology] list is correct. The majority of LXX manuscripts give 167 as the age of Methuselah at the birth of his son, Lamech (the Hebrew reads 187 – Gen. 5:25). However, if Methuselah were 167 at the birth of Lamech, Lamech 188 at the birth of Noah, and Noah 600 at the Flood (as recorded in the LXX), Methuselah would have been 955 at the date of the Flood. Since he lived to be 969 (the life span given in both), the LXX becomes entangled in the absurdity of making Methuselah survive the Flood by 14 years! Yet Genesis 7-10 and 2 Peter 3:20 are adamant in proclaiming that only Noah, his three sons and all four of their wives; that is, only eight souls survived the Deluge.