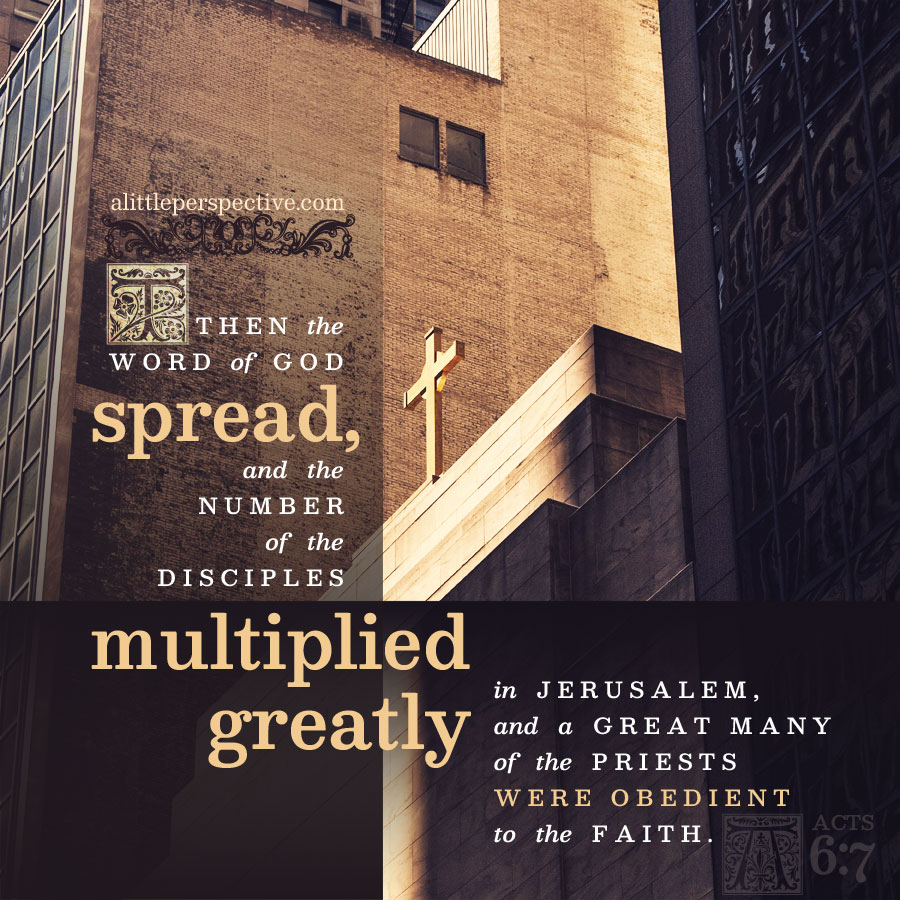 1a) Act 6:1a, Now in those days, when the number of the disciples was multiplying;

1b) Act 6:1b, The Hellenists complained against the Hebrews, because their widows were neglected;

1c) Act 6:2a, Then the twelve summoned the multitude of the disciples and said;

1d) Act 6:2b, “It is not desirable that we should leave the word of God and serve tables;”

central axis) Act 6:3, “Therefore, brethren, seek out from among you seven men of good reputation, full of the Holy Spirit and wisdom, whom we may appoint over this business;”

2d) Act 6:4, “Bbut we will give ourselves continually to prayer + the ministry of the word;”

2c) Act 6:5a, And the saying pleased the whole multitude;

2b) Act 6:5b-6, The complaint addressed: They chose Stephen, a man full of faith + the Holy Spirit + Philip, Prochorus, Nicanor, Timon, Parmenas, + Nicolas, whom they set before the apostles/ they prayed + laid hands on them;

2a) Act 6:7, The word of God spread + number of disciples multiplied greatly in Jerusalem/ many of the priests were obedient to the faith.

The Hellenists were Jews (not Greeks) who had relaxed a lot of the customs and laws of Moses in their daily lives, and lived more like Greeks. Herod and his family were Jews who were Hellenists. We have to remember that when Alexander the Great conquered the ancient world in 332 BC, Greek culture flourished everywhere. Even Rome was changed by it. And Judea was no exception.

The Hellenist Jews charged the Hebrewist Jews with wrongdoing, in neglecting their widows. This is a case of the party, who was always feeling a bit inferior because the Hebrewists were constantly charging them with unrighteous living, seeing a chance to get back a little bit and charge the Hebrewists with unrighteousness for a change. ? The fact is, the Church was growing so fast that it soon was beyond the ability of twelve men to administrate. So they established seven deacons, whose job it was to minister to the physical needs of the Church, leaving the apostles free for prayer and the study and teaching of the Word.

We have had several chapters where we saw how anointed by the Spirit the apostles were. Now we are seeing the deacons come into the same anointing, of wisdom, boldness, and working miracles with power. Why take care to bring this out? The point is to teach, I believe, that the Holy Spirit, the wisdom, the gifts, the anointing, and the miracles was not just for the apostles! The truth is, the work of the Church cannot go forward without new men constantly being raised up, who are filled with the Spirit, who can carry on in the same vein as the apostles. And that is what these next chapters in Acts are going to show us.

Note that Luke brings out the fact, in verse 7, that a great many of the priests were becoming obedient to the faith. It makes sense that the men, who were most familiar with the Law, would finally see in Jesus, the fulfillment of the Law. Nowhere does it say that the priests LEFT the service in the Temple or the Law of Moses. They continued as before. But now they were obedient to the faith, i.e., they believed Jesus to be the Messiah, whose death on the cross forgave them their sins once and for all. They did not start eating pork chops and shrimp scampi, work on the Sabbath, or have affairs with their neighbors’ wives, just because they had come to faith in Jesus.

The opposition that arose against Stephen bears this out. They were not able to resist his wisdom, in showing that Jesus was the Messiah who had been raised from the dead. So they had to hire men to say lies about him, in order to get him arrested. The lies were: that he was speaking against Moses, against the Law, and against God. The lie was that Jesus would change the customs they had from Moses (eating kosher or resting on Sabbath or other points from the Law).

Beloved, what we have heard taught for 1700 years, that the Torah has passed away because Jesus has done away with it, is the original LIE that was brought against the Church and the apostles by her enemies. The purpose of lies is to steal, kill, and destroy, for the enemy is the liar and the father of lies.

If this is a new realization for you – stick with me, every day we are showing that the Scriptures from Genesis to Revelation teach ONE God, ONE gospel, and ONE faith, that has remained consistent from beginning to end. God is unchanging, and His word is unchanging. Jesus Christ is the same yesterday, today, and forever. We do not serve a schizophrenic God who suddenly changed horses in the middle of the stream of history, and discarded the Old Testament in favor of the New. The New explains the Old, and the Old explains the New. It is the nature of the eternal and living Word of God.