When our children were little, we established our own Family Law which incorporated obedience to the Ten Commandments. 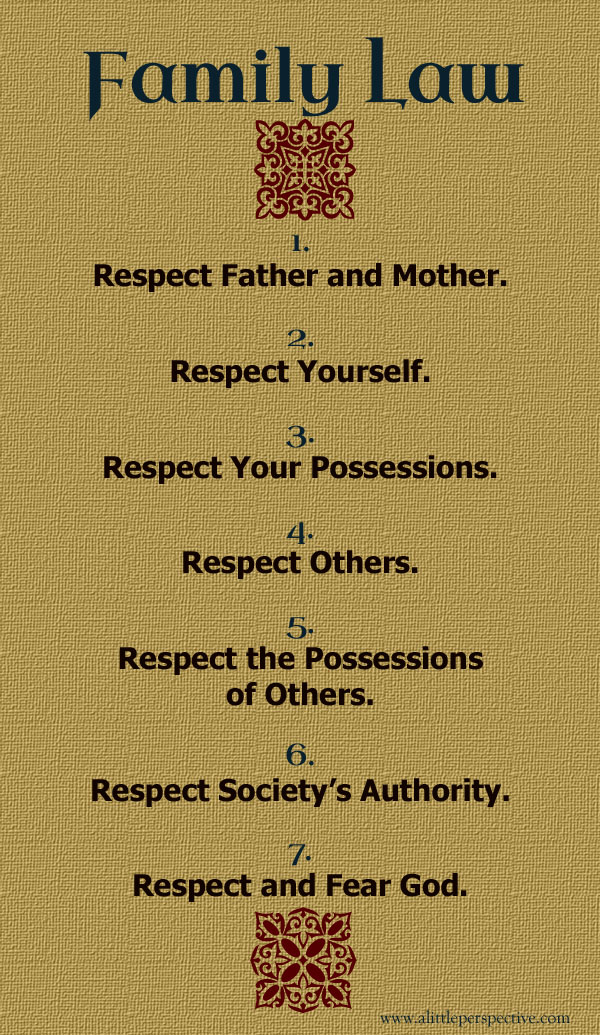 1. Respect Father and Mother (begin teaching before the first birthday).

What this means: obey parents immediately, do not test them (toddlers are notorious for testing their parents, but this is the way they learn that Mom and Dad will be consistent and unchanging). Older children will learn that they respect their parents by always telling them the truth and never lying, and by not displaying bad attitude toward them. Yes, this means rolling the eyes, and saying, “Just a minute!” when asked to do something!

2. Respect yourself (begin teaching before the second birthday).

What this means: keep yourself clean, toilet training, brushing teeth, personal hygiene, pride in a neat appearance. When children are teens, sins such as overeating or under-eating, or drug or alcohol abuse, or immorality fall under this law.

3. Respect your possessions (begin teaching before the third birthday).

What this means: pick up your toys, keep your room neat, make your bed, treat your things with care. Older children will learn to wisely judge whether to loan their things out to others who may not treat them as carefully as they would.

4. Respect others (begin teaching before the fourth birthday).

What this means: treat others with honor – no name-calling, hitting or violence, purposeful humiliation or cruelty. No gossiping or spreading lies about others. Do unto others as you would have others do unto you.

5. Respect the possessions of others (begin teaching before the fifth birthday).

What this means: do not grab toys away, borrow without asking, steal, or treat others’ things carelessly. Do not covet. Do not enter another’s room or home without permission.

What this means: respecting any legitimate authority outside the family, such as grandparents, Sunday School teachers, pastors, school teachers, police or other authorities. Since there is a growing problem of adults positioning themselves as authorities so they can abuse children, parents will also need to teach their children how to tell if an outside adult is using authority given to them by God, or usurping power. An outside authority will use their authority in God-ordained ways, and never to break God’s Law themselves. A child is never displeasing to God by refusing to obey an outside authority who is himself disobeying God. It is such a burden for a six-year-old to learn, but in today’s world they must learn it to protect themselves from predators, since our society allows predators to live among us.

What this means: as a family, we will strive to obey God in our thoughts, actions, and treatment of each other. We will engage in personal and corporate worship, personal Bible reading, no swearing, and obedience to the other laws of God as God is the Lawgiver.

These seven rules are short enough for the youngest children to memorize, but comprehensive enough so that they cover every childish sinfulness.

When the children did something, I would take them to the refrigerator, have them read (or recite, after me if very young) the Family Law and tell me which point they violated. They always knew. The consequences were posted next to the rule, so I could calmly administer the discipline for disobedience without becoming angry or being the “bad parent.”

It wasn’t long after we began consistently applying the Family Law with our children that we ran into our greatest challenge.