You are here: Home / Bible Study / romans / romans 16, those who cause divisions

Previously: romans 15, receive one another

“Now I urge you, brethren, note those who cause divisions and offenses, contrary to the doctrine which you learned, and avoid them. For those who are such do not serve our Lord Jesus Christ, but their own belly, and by smooth words and flattering speech deceive the hearts of the simple. For your obedience has become known to all. Therefore I am glad on your behalf; but I want you to be wise in what is good, and simple concerning evil.” Rom 16:17-19 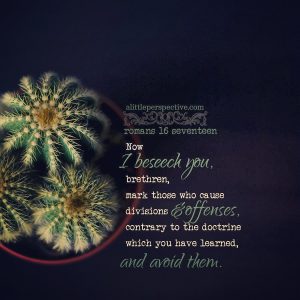 The Hebrew letters which convey echad mean, from the ancient pictographs, “to strongly fence the door.” In other words, if two are together, and a dispute breaks out, neither one of them departs from the other, because the exit door is strongly fenced. That is what it means in Hebrew to be united, to be one. If we are one, as Yeshua and His Father are one, then there is no departing from each other.

A division is in Greek, Strong’s G1370, dichostasia, and it is from the same root that our English word “dichotomy” comes from. The root “di” indicates division in many languages other than Greek. The Greek word is from two roots which mean, “asunder, apart,” and “standing;” so a division is that which causes “a standing apart,” “a standing asunder.”

Sometimes we have to come out from among them and be ye separate (2 Cor 6:17), or else send them out from us, as we saw yesterday, for unrepentant violations of clear Scripture (1 Cor 5:1-2). But Paul is talking about disputes or divisions — tearings asunder — over doubtful things (Rom 14:1).

An offense is in Greek, Strong’s G4625, skandalon, and it is from the same root that our English word “scandal” comes from. It literally means the trigger- stick of a trap, like the thing on a mousetrap that the cheese is put by, that causes the trap to snap shut if it is moved. Thus it is any impediment placed in the way of another that causes them to stumble in their walk. Offenses, which can be caused by disputes over doubtful things, are stumbling blocks put in the way of others, that trips them up so that they fall and have trouble walking with God!

Paul says, first mark such people, look at them, observe them with scrutiny, paying heed to them and contemplating them with attention. Then, avoid such people, for they are not serving the Lord Jesus Christ but themselves. When Paul says, be wise in what is good, one thing to be wise in, is that it is good to avoid those who put stumbling blocks in the paths of others! The world’s definition of good is to tolerate everything; but that is not the Word’s definition of good!

« the things which are not
the accusing tongue »