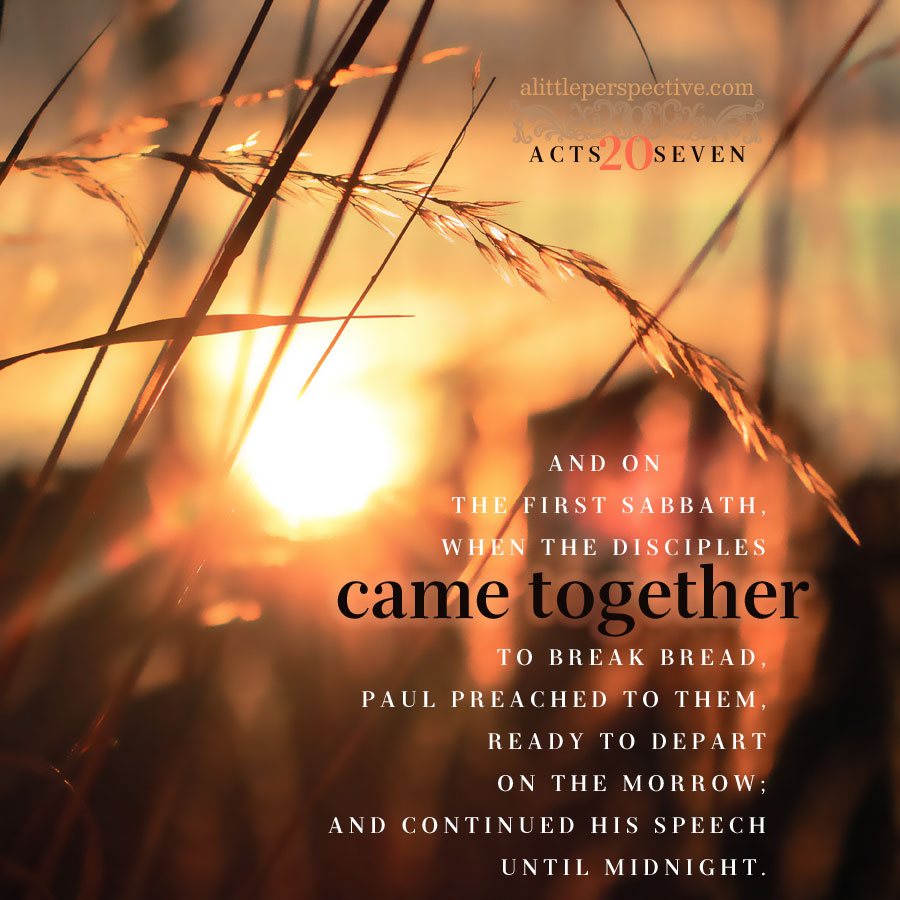 Previously: in His presence there is fullness of joy

I procured a Greek New Testament, and have been looking up the instances of Sabbath, and sabbaton, in it. Sabbaton, I said last time, means “Sabbath,” (singular); but my new Greek lexicon says it is plural (i.e, it should read “Sabbaths”). So I looked up our text we were discussing, Acts 20:7, and it is in the Greek New Testament, mia ton sabbaton. That is a little different from my Bible study dictionary.

Mia is the feminine form of heis, and my Bible study dictionary says it means “first.” So, “the first of the Sabbaths.” Well, this is a bit longer than saying, “the First Sabbath,” but it still means the same thing; the first of the special numerated Sabbaths which occur between Unleavened Bread and Weeks.

Next I did a search for the English word “first” in the New Testament Scriptures, cross checking them with the Greek New Testament. I expected to find forms of heis or mia, and found instead that in 99% of the cases, the Greek word for “first” is protos. Ah! So this is where we get words like “prototype” from.

I thought, Why did my Bible study dictionary tell me that heis, mia meant “first?” And as I began going through the Gospels, looking up each occurrence of “first,” which turned out to be protos, I discovered that the context was talking about priority, without reference to a numerated series. So I began to think that perhaps heis, mia was used in place of protos when a numeration, a numerated series, is meant. I was happy with that theory until I came to Mat 22:23-28:

The same day the Sadducees, who say there is no resurrection, came to Him and asked Him, saying: “Teacher, Moses said that if a man dies, having no children, his brother shall marry his wife and raise up offspring for his brother. Now there were with us seven brothers. The first died after he had married, and having no offspring, left his wife to his brother. Likewise the second also, and the third, even to the seventh. Last of all the woman died also. Therefore, in the resurrection, whose wife of the seven will she be? For they all had her.”

Ah! A numerated series, first, second, third, down to the seventh! Time to test my theory! If heis, mia is to be used to mean “first” when speaking of numeration rather than priority, the word for “first” in the above passage should be a form of heis, mia. I eagerly looked it up in my Greek New Testament and … it was protos. So I thought, “Well, this is Matthew, and Luke wrote Acts. He also wrote Luke, so while we may account for the different use of protos vs. heis, mia between Matthew and Acts due to two different authors, we cannot say the same of Luke and Acts. We would expect an educated fellow like Luke to be consistent in his usage.”

This same incident with the Sadducees is also recorded in Luk 20:27-33, also using a numerated series. The Greek word for “first” is also protos here.