A nice Canadian lady sent ricin to @realDonaldTrump. Being a Canadian, of course she has a bug up her exhaust pipe about American immigration policy. 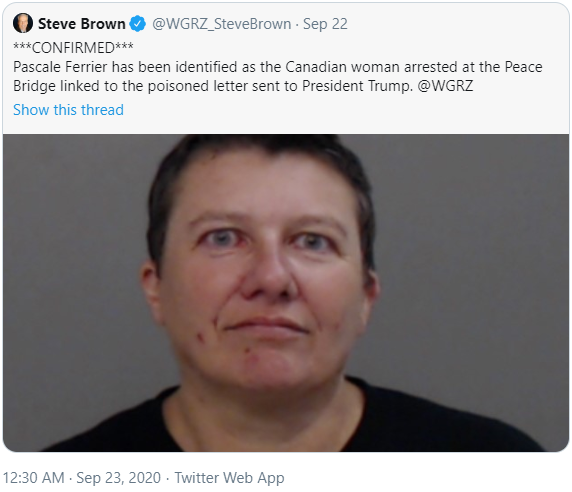 She keeps coming to the US with guns to try and kill ICE and Border Patrol and anyone else who stops illegal immigration. This time she won’t be let out. EVER. A Biden supporter, no doubt.

Chris Wallace and his wig have released the topics of the first debate between Trump and Biden:

Race and violence in our cities.

The integrity of the election.

This would be a suicide mission for Biden even if he weren’t senile.

All the topics are pluses for Trump and catastrophes for Biden.

Leftists have self-induced amnesia, but when the pandemic started, Fauci and Birx said best-case scenario is 150,000 to 300,000 dead.

AND NOBODY SANE BLAMES TRUMP.

The Biden tactic is to simply criticize without explaining in detail how HE would’ve prevented the outcome that SCIENTISTS predicted.

DEMOCRATS SHUT IT DOWN AND ARE KEEPING IT SHUT DOWN.

Riots and violence in the cities?

DEMOCRATS SUPPORT IT AND ENABLE It.

After the lynching of Jake Gardner, Wallace is an idiot to even talk about this.

RUTH BADER GINSBURG SAID IN 2016 THAT THE PRESIDENT HAS AN OBLIGATION TO FILL VACANCIES DURING HIS ENTIRE TERM.

And Democrats are threatening to impeach Trump for FOLLOWING the Constitution.

The integrity of the election?

DEMOCRATS ARE TELLING EVERYONE TO VOTE IN PERSON.

The madness has finally gone as far as it possibly can, EXCEPT…

His dementia gets worse after sunset.

He couldn’t control his rage BEFORE he became demented.

Here’s what we may just see:

Anti-dementia medications all cause incontinence.

If they starve him, they have to give him speed to keep him awake.

This could be absolutely horrifying.

There’s no such thing as a “sympathy vote” for president.

If Biden can’t hack it, he loses.

And Biden can’t hack it.

Trump knows what to do. He won’t be cruel, but he also won’t spare Biden.

The soft center of the Democrats’ deranged campaign is that Biden’s record is 47 years of FAILURE.

As Trump himself said, “NOW he’s going to do a good job?”

Wallace is NOT the right man for the job. His personal dislike of Trump and his need to do his masters’ bidding allow Trump to mock HIM more than Biden.

Wallace and the Democrats haven’t been watching Trump’s peaceful protests.

He’s an absolute MASTER of ad libbing humorously over his prepared remarks.

Trump told Biden what he’s going to do.

Since Biden is steadfastly repeating the LIE that Trump called fallen soldiers “losers” and “suckers” and is repulsed by disfigured veterans, Trump said THIS repeatedly:

“I can now take off the gloves.”

You think Trump is going to let Wallace get away with ANYTHING?

He doesn’t tell jokes or funny stories; his humor lies in his delivery.

Do you know the British actor Terry Thomas?

His gift was in the way he DELIVERED his lines.

It was always said that Terry Thomas could make the TELEPHONE BOOK funny by simply reading from it.

So he was once asked to do so on a talk show, and it WAS funny.

I can’t find it anywhere, but Christopher Walken has the same ability.

Guess where Walken is from?

You got it. Queens.

Trump has the same ability to make ANYTHING funny in his peaceful protests.

And he’s not saying anything intrinsically funny.

The only thing I can say about the Democrats and Fox News is that they’re off their rockers.

To think Biden has even a ghost of a chance is derangement born of total desperation.

I’m not sure I even want to watch the debate.

The outcome of this election is a foregone conclusion.

Have you seen this Chinese video of their “first strategic bomber”?

It’s a license-built copy of the Tupolev Tu-16.

That version is the H-6K, which was “upgraded” with the SOVIET ERA Soloviev D-30 turbofan engine.

That means it can fly 1100 miles with a combat load and return home without refueling.

The B-2 Spirit stealth bomber has a combat radius of 7000 miles.

All the action scenes in the Chinese video were lifted from AMERICAN MOVIES.

And the cockpit is a crappy mockup.

One throttle for two engines.

Look at that untrimmed fingernail. 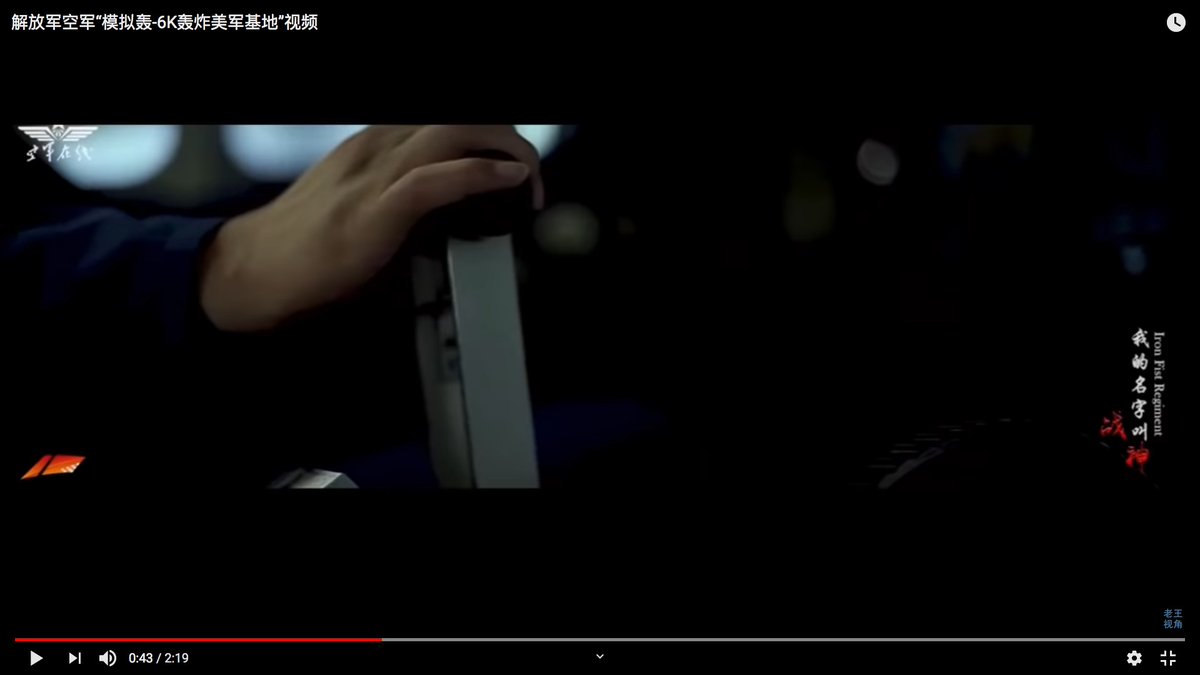 Not one Chinese nuclear missile has been PROVEN TO WORK.

Did you see this?

The American press is refusing to report on this.

You know why Kim Jong-un is out of sight?

So are the South Koreans.

Why isn’t the American press reporting this?

“South Korean President Moon Jae-in restated a call Wednesday for the declaration of an end to the Korean War, saying it would pave the way for complete denuclearization and lasting peace on the peninsula.”

What if THAT happened before the election?!

Walk without rhythm, and it won’t attract the worm.