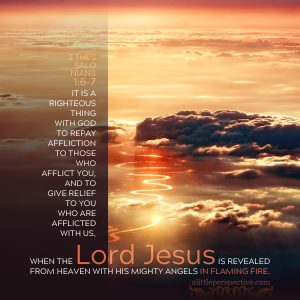 The Thessalonians were being persecuted and endured tribulations caused by others who did not believe as they did, who did not receive or believe the testimony and preaching that Paul preached among them. Those who did not believe, did not know God, and did not obey the gospel of the Lord Jesus Christ. God wants to be known, and not only known about, but known in a continuing, growing relationship with man. He is our Father and loves us as much (and more so) as earthly fathers love their children. If you are a father or a parent you have barely begun to scratch the surface of the depth of God’s love for His children.

But as a parent, what is your response when someone makes it their mission to persecute your child? You make an end to the persecution, by whatever means necessary. God feels the same way, but is also in the unique position of wanting His children’s persecutors to also come to know Him, to also become a child of God. The testimony of faith and patience despite suffering witnesses to the unbeliever of the validity of the faith of the persecuted. So God doesn’t recompense the persecutors right away. He leaves room for His children’s witness to work.

But, if those who do not know Him, refuse to the end to know Him, and refuse to the end to be moved by the testimony of the validity of the gospel which is being lived out in front of their eyes, then in the day of the Lord’s return, the age of grace will end. God will be acting in righteousness to recompense tribulation to those who troubled His own.

Paul gives us a glimpse of the tribulation God will mete out to unbelievers in that day: they will be separated forever from His glorious presence and power. They will be alone, in other words. Their separation will last for eternity. Believers will dwell in the presence of God for eternity. If an unbeliever will be separated from God for eternity, then they will also be separated from those who are His for eternity. Perhaps an unbeliever enjoys relationships with other believers today. Enjoy it while it lasts, because the day is coming when the God you refuse to know will grant your request, and you will lose the opportunity to know Him and those who are His, forever.

Church, are you being ridiculed, mocked, or ostracized because of your faith in God? Bear it with patience, not allowing your faith to be diminished because of it. God is also preparing recompense for you: peaceful rest from tribulations forever.