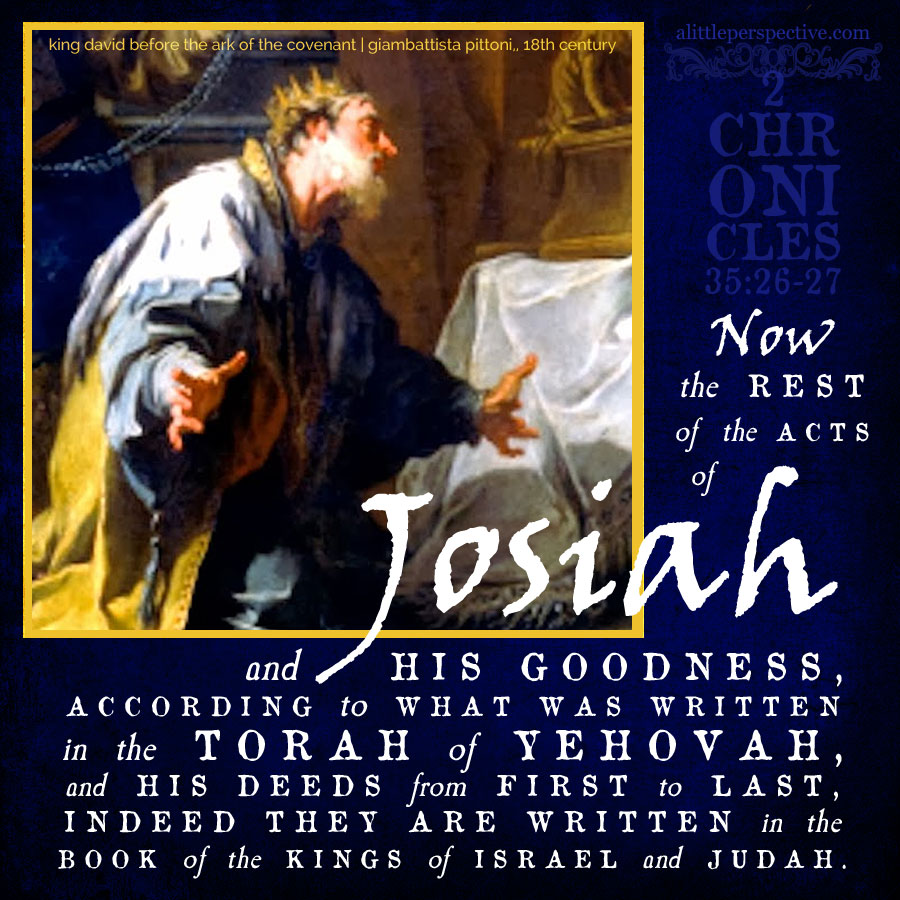 Now the rest of the acts of Josiah, and all that he did, are they not written in the book of the chronicles of the kings of Judah? In his days Pharaoh Necho king of Egypt went to the aid of the king of Assyria, to the River Euphrates; and King Josiah went against him. And Pharaoh Necho killed him at Megiddo when he confronted him. Then his servants moved his body in a chariot from Megiddo, brought him to Jerusalem, and buried him in his own tomb. And the people of the land took Jehoahaz the son of Josiah, anointed him, and made him king in his father’s place. {p} 2 Kin 23:28-30

After all this, when Josiah had prepared the temple, Necho king of Egypt came up to fight against Carchemish by the Euphrates; and Josiah went out against him. But he sent messengers to him, saying, “What have I to do with you, king of Judah? I have not come against you this day, but against the house with which I have war; for God commanded me to make haste. Refrain from meddling with God, who is with me, lest He destroy you.” Nevertheless Josiah would not turn his face from him, but disguised himself so that he might fight with him, and did not heed the words of Necho from the mouth of God. So he came to fight in the Valley of Megiddo. And the archers shot King Josiah; and the king said to his servants, “Take me away, for I am severely wounded.” His servants therefore took him out of that chariot and put him in the second chariot that he had, and they brought him to Jerusalem. So he died, and was buried in one of the tombs of his fathers. And all Judah and Jerusalem mourned for Josiah. {p}

This little footnote of history is prophetically significant (see the teaching tools of scripture more on the teaching tool of history that prophesies). The Assyrians became masters of the known world and ruled it cruelly from their capital in Nineveh for many years. In 721 BC they besieged Samaria, overcame it, and took Israel captive out of their land, from whence they did not return. Thus ended the northern kingdom of Israel. The southern kingdom of Judah was sometimes vassal to the Assyrians, i.e. they paid them a large annual tribute to be left in peace, and sometimes free (as when King Hezekiah refused to pay the Assyrian tribute and the Lord miraculously delivered them from the Assyrians’ wrath, 2 Kin 18-19, in 710 BC). In the course of time, the Babylonians, allied with the Medians, rose up against Assyrian rule and destroyed their capital of Nineveh in 626 BC. The rule of the empire passed to the Babylonians, the Medians being free from tribute as Babylonian allies. Now this event occurred during the reign of righteous Josiah in Judah. He remained a vassal of Babylon as he had been formerly of Assyria.

610 BC. By God’s command, Pharoahnecho, king of Egypt, set out to go into battle against the king of Assyria, who was at war with him at the time, and was planning to besiege Carchemish on the Euphrates River {2 Kin 23:29, 2 Ch 35:20-22}. Josephus stated that he went to fight against the Medes and Babylonians, who had overthrown the empire of the Assyrians {*Josephus, Antiq., I. 10. c.  6. s. 1. (84) 6:205}. Carchemish, at the time of Sennacherib, belonged to and was occupied by the Assyrians {Isa 10:9}. However, when that kingdom was destroyed, it returned into the hands of the Babylonians…. When Josiah unadvisedly entered into this war, he was killed. This took place in the valley of Megiddo which belonged to the tribe of Manasseh…. Since the good king was killed in this way and his being alive has postponed the Babylonian captivity from being visited on the nation {2 Kin 22:20}, the previous year’s Jubilee was turned into a year of lamentation. It almost became a common proverb, The lamentation of Hadad-rimmon in the valley of Megiddo {Zec 12:11}. Not only did all the people of that time bewail the death of Josiah, but even later, a public mourning for him was voluntarily kept. The prophet Jeremiah also wrote a song of remembrance called The Song of… Lamentations.

Necho, son of Psammetichus, succeeded to the throne of Egypt in the twentieth year of Josiah. He was a bold and enterprising king, who entered with all his heart into the struggle which the two great powers of Egypt and Assyria had long carried on for the political ascendency. Each, jealous of the aggressive movements of its rival, was desirous to maintain Palestine as a frontier barrier. After the overthrow of Israel, the kingdom of Judah became in that respect doubly important. Although the king and people had a strong bias for alliance with Egypt, yet from the time of Manasseh it had become a vassal of Assyria. Josiah, true to his political no less than his religious engagements, thought himself bound to support the interests of his Assyrian liege lord. Hence, when “Necho king of Egypt came up to fight Carchemish, Josiah went out against him.” Carchemish, on the eastern side of the Euphrates, was the key of Assyria on the west, and in going thither the king of Egypt would transport his troops by sea along the coast of Palestine, northwards. Josiah, as a faithful vassal, resolved to oppose Necho’s march across the northern parts of that country. They met in the “valley of Megiddo,” that is, the valley or plain of Esdraelon.

As passage through the northern plain was Egypt’s only direct route to the Euphrates, the Egyptian king turned eastward there after his ascent through the seacoasts of Philistia.

Not wishing to spend time, or strength in vain, Necho informed the king of Judah that he had no intention of molesting the Jews; that his expedition was directed solely against his old Assyrian enemy; and that he had undertaken it by an express commission from God…. The engagement [nevertheless] took place. Josiah was mortally wounded [2 Ch 35:23]….

The elegy of [Jeremiah’s Lamentations] has not reached us; but it seems to have been long preserved among his countrymen and chanted on certain public occasions… The spot in the valley of Megiddo where the battle was fought was near the town of Hadad-rimmon; hence the lamentation for the death of Josiah was called “The Lamentation of Hadad-rimmon in the valley of Megiddo,” which was so great and so long continued, that the lamentation of Hadad passed afterwards into a proverbial phrase to express any great and extraordinary sorrow (Zec 12:11).

Megiddo just happens to appear again in prophetic Scripture, during the interval period between the 6th and 7th bowl of wrath:

These are the days we are currently living in. Now because righteous Josiah was allied with Babylon, then, he became engaged in a battle at Megiddo – the same place name for Armageddon – which gained his country nothing; in fact, it opened the door for the Babylonian captivity, and cost him his life. Let the history which prophesies warn us to disengage and untangle ourselves from our alliance with Babylon, but instead, let us watch, and keep our clothes: our fine linen, clean and bright, which are the righteous acts of the saints, for Behold, our King is coming!

Some of this commentary was taken from Christine Miller’s newly released book, The Revelation of Jesus Christ Revealed. Would you like to understand how the teaching tools of Scripture provide the keys that unlock the meaning of the prophecy of the end? Get your copy today!