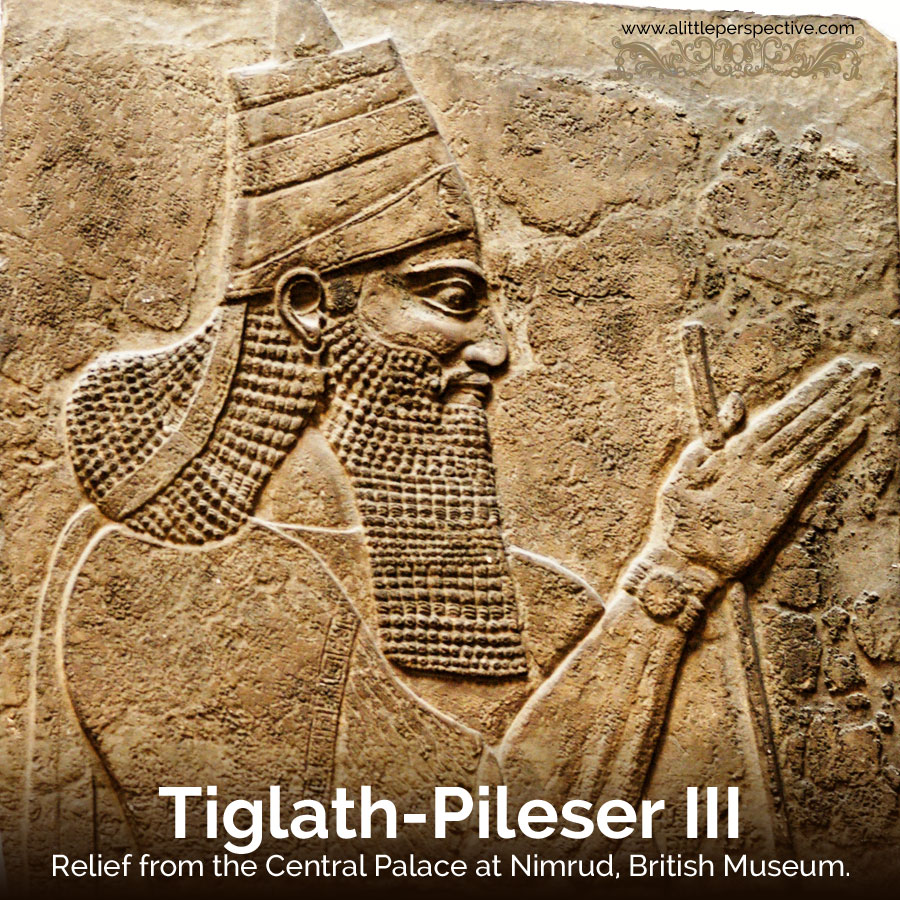 Concerning the kings of Assyria, in my New King James Bible, it says,

Pul king of Assyria came against the land; and Menahem gave Pul a thousand talents of silver, that his hand might be with him to strengthen the kingdom under his control. 2 Kin 15:19

with a footnote after Pul’s name, which says,

So the God of Israel stirred up the spirit of Pul king of Assyria, that is, Tiglath-Pileser king of Assyria. He carried the Reubenites, the Gadites, and the half-tribe of Manasseh into captivity. He took them to Halah, Habor, Hara, and the river of Gozan to this day.

The original Hebrew treats the two kings as if they were two separate kings, Tiglath-Pileser merely succeeding Pul on the throne. This turn of events is explained from Assyrian and Babylonian history in The Story of the Ancient World, as follows (the repentance of the kings of Nineveh (Assyria) was due to the preaching of Jonah, for all that generation):

“Now Pul, the king of Assyria, came against Israel, and Menahem offered him a tribute of one thousand talents of silver, if he would confirm him on the throne of Israel. Pul agreed, and Menahem obtained this great sum—many millions of dollars in today’s money—by heavily taxing the Israelites (771 BC). But Menahem died after a reign of ten years, and was succeeded by his son, who did not rule long, for one of his captains murdered him, and reigned in his stead (759 BC).

“The new king of Babylon was Na-bo-nas´sar, and as usurpers often have difficulty securing their hold on the kingdom, Assyrian affairs were neglected for a time. In the mean while, Asshurnirari, the king of Nineveh—one of those kings who had walked in repentance before the Lord God—also died (745 BC).

“Thus it was that a usurper in Assyria saw his opportunity as well. With Pul dead, and Nabonassar occupied, Asshurnirari’s ambitious gardener rose up and seized the throne of Assyria. This monarch’s name was Tig-lath-pil-e´ser, and he did not walk in repentance before the Lord as had his predecessors.

“Because of the generation of Ninevites who lived in repentance, Assyria had been reduced back to her old national boundaries; but Tiglath-pileser immediately sought to remedy this state of affairs. He mobilized the army, and prepared them so well that the king of Assyria was soon ready once again to embark on a career of conquest.”

This history is confirmed by George Rawlinson (Camden professor of ancient history at Oxford University, 1861-1889) in The Five Great Monarchies of the Ancient Eastern World, Vol 2., pages 122-124:

“One important difficulty presents itself, at this point of the narrative, in an apparent contradiction between the native records of the Assyrians and the casual notices of their history contained in the Second Book of Kings. The Biblical Pul — the “king of Assyria” who came up against the land of Israel … is unnoticed in the native inscriptions [of the Assyrians], and even seems to be excluded from the royal lists by the absence of any name at all resembling his in the proper place in the famous Canon [of Assyrian kings]. … [here he discusses the assertion that Pul and Tiglath-Pileser are the same man, and discards the notion with evidence] … Berosus [the most accurate Babylonian historian from ancient times] represented Pul as a Chaldean king; and the name itself, which is wholly alien to the ordinary Assyrian type, has at least one counterpart among known Babylonian names.”

Pul, who made Assyria tributary to the Babylonian throne, was indeed the “king of Assyria” as Scripture attests, in this epoch. Vassalage to the Babylonians ended with the rise of Tiglath-Pileser.