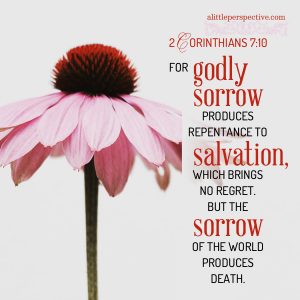 Paul’s explanation of the difference between worldly sorrow and godly sorrow is in the context of being caught doing something wrong. He is referring to his earlier letter, 1 Corinthians, in which he had to be stern and rebuke the Corinthian church for the things they were doing wrong. This rebuke produced in them godly sorrow, because they repented of what they had been doing and corrected their ways.

This is such an important passage for parents to understand, that there are two types of “I’m sorry” when people (i.e., children) get caught. The first, most common type, is worldly sorrow. Paul says this kind of sorrow leads to death. Worldly sorrow is when people are genuinely sorry that they got caught doing something wrong, because the consequences of their actions are making their lives miserable now. They are sorry they are having to pay a price. But they are not sorry that they sinned, just that they have to pay the price. That is why worldly sorrow leads to death.

Godly sorrow leads to repentance. It is when people are genuinely sorry for the actual sin that they have committed, and they realize how wrong it is and how greatly it offends God. They experience sorrow over the intrinsic nature of the sin, whatever it is. This kind of sorrow leads to repentance; it motivates the heart to turn away from that sin and never do it again.

God is One who defines sin and righteousness in the Law. There are a lot of people who read those laws, and think “That doesn’t make sense, how could that be wrong.” In fact, this is a big argument used to mainstream the gay agenda – what two consenting adults do in the privacy of their home doesn’t hurt anyone else.

We have to realize that the Scripture teaches that all sin hurts someone. If God says something is a sin, then in His great wisdom, He understands how it hurts someone, even if we don’t. We need to accept that God is smarter than we are, what He says is sin, is sin; and be mortified by it. We have to have our own minds renewed first, and we must go to the Law to renew it on this topic.

Both parents and children can get God’s heart and mind over sin by keeping the Torah in the forefront of their minds and hearts night and day, just like God said parents ought to do in Deu 6 (and Psa 119 and in many other places): when He emphasized listen to, take heed, observe, and teach My Law to your children over and over again. He knows that listening and paying heed to His Law, His Torah, will get the right heart and mind in people over sin.