Previously: 2 corinthians 12, the heart of glory

And He said to me, “My grace is sufficient for you, for My strength is made perfect in weakness.” Therefore most gladly I will rather boast in my infirmities, that the power of Christ may rest upon me. 2 Cor 12:9 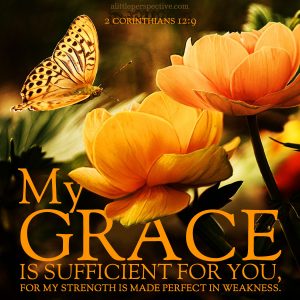 First, grace: it is Strong’s G5485, charis, and means, “that which affords joy, pleasure, delight, sweetness, charm, and loveliness; and the good will, merciful loving-kindness, and favour by which God, exerting His divine influence upon the heart, turns people to Christ, then keeps, strengthens, and increases them in Christian faith, knowledge, and affection; and kindles them to the exercise of the Christian virtues.”

We often think of grace as God simply excusing our sins (therefore what does it matter if we continue in them). But the meaning of the Greek word is that grace is God’s divine influence on our hearts that enables us to leave those sins behind and turn around (the actual meaning of “to repent”), increasingly walking in the path of the Biblical virtues. In other words, grace not only covers over our past sinfulness, but also is the transforming agent in our present, which is transforming us from the inside out, so that it can be truly said of any man who is in Christ that he is a new creation (2 Cor 5:17).

God was telling Paul that His grace was at work in Paul’s life: Paul was the recipient, not only of forgiveness, but God’s good will, His merciful lovingkindness, and His favor on a daily basis. Paul was in the process of being transformed by the exertion of God’s divine influence on his heart and life. Grace had set him in Christ, and grace was keeping and strengthening him in Christ and in faith.

Now, sufficient: it is Strong’s G714, arkeo, and means “to be possessed of unfailing strength, of enough strength to defend against and ward off any danger,” therefore there is also the accompanying meaning of being satisfied and contented, since enough is provided. Webster’s says that sufficient means enough to meet the needs of a situation or a proposed end; all that is necessary.

Sufficient grace, then, means yes, in this world you will have tribulations from without of various kinds, infirmities of the body or imperfections in circumstances, and also temptations or tests from within, weaknesses of character. However (and this is the big however that changed Paul from pleading to rejoicing), you are not alone in your infirmities, tribulations, and weaknesses. God has provided His grace: He loves you and has saved you, His favor now rests upon you, He daily gifts you with that which affords joy, delight, and sweetness; His divine influence is at work and is daily transforming, not only your weaknesses from within, so that you increase in faith and knowledge, but your circumstances from without … sometimes by direct intervention (miracles and answers to prayer) and also by growing in wisdom, so that the circumstances naturally improve as a result of wise instead of foolish choices. And not only has God provided this grace which will accomplish these ends, but He has provided it in enough quantity to meet all that is needed, being able to see the road ahead of us and preparing provision for it in sufficient time and sufficient measure.

Isn’t our Father a good Father! ♥