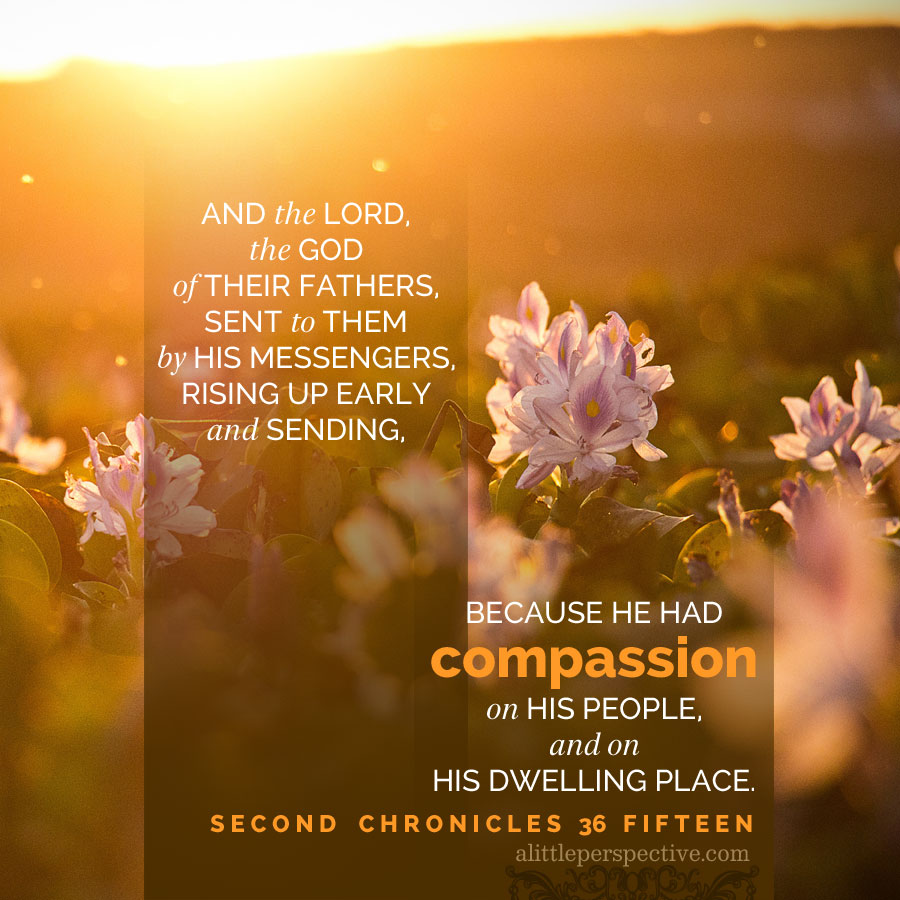 2 Chr 36:11-21 {s} The reign of Zedekiah son of Josiah, who did evil, Nebuchadnezzar destroyed the city + temple

1a) 2 Chr 36:11-12a Zedekiah was twenty-one years old when he became king, and he reigned eleven years in Jerusalem. He did evil in the sight of the Lord his God;
1b) 2 Chr 36:12b And did not humble himself before Jeremiah the prophet, who spoke from the mouth of the Lord;
1c) 2 Chr 36:13a He also rebelled against King Nebuchadnezzar, who had made him swear an oath by God;
central axis) 2 Chr 36:13b But he stiffened his neck + hardened his heart against turning to the Lord God of Israel;
2c) 2 Chr 36:14 Moreover all the leaders of the priests + people transgressed more and more, according to all the abominations of the nations, and defiled the house of the Lord which He had consecrated in Jerusalem;
2b) 2 Chr 36:15a And the Lord God of their fathers sent warnings to them by His messengers, rising up early and sending them;
2a) 2 Chr 36:15b Because He had compassion on His people and on His dwelling place;

1B) 2 Chr 36:16a But they mocked the messengers of God, despised His words, and scoffed at His prophets;

CENTRAL AXIS) 2 Chr 36:16b Until the wrath of the Lord arose against His people, till there was no remedy;

2B) 2 Chr 36:17 He brought against them the king of the Chaldeans, who killed without compassion/ He gave them all into his hand;

The history of Nebuchadnezzar’s interactions with Jerusalem:

Jehoiakim paid tribute to Egypt until the 8th year of his reign. By that time, Nebuchadnezzar, then merely the Babylonian general, being the son of the king, having finally defeated the Egyptians and made them his vassals, came against Jerusalem, and received Jehoiakim’s promise that he would no longer be vassal to Egypt but to Babylon. This is Nebuchadnezzar’s first subjection of Jerusalem. He carried away all the vessels of the Temple, and noble Hebrew youths to serve him at his court, of which Daniel was one (607 BC). He then withdrew without destroying either city or Temple.

However, Jehoiakim did not keep his promise. When Nebuchadnezzar succeeded his father as king of Babylon , Jehoiakim conspired with Egypt and soon rebelled against Babylon. Nebuchadnezzar had some trouble closer to home at first to deal with upon his ascension, but in Jehoiakim’s 11th year, King Nebuchadnezzar came against Jerusalem a second time, and subdued it, putting Jehoiakim to death. He furthermore placed Jeconiah (Jehoiachin) his son on the throne, after receiving his promise that he would be a faithful vassal to Babylon. For the second time he departed without destroying either city or Temple.

However, King Jehoiachin made so much trouble, that just 3 months later Nebucadnezzar came again to Jerusalem in anger, carrying off king, courtiers, and 10,000 prisoners to Babylon, of whom Ezekiel was one. He chose Zedekiah, the remaining son of Josiah, to serve as king instead, after having received his promise to be a faithful vassal to Babylon. For the third time Nebuchadnezzar departed without destroying either city or Temple.

Zedekiah at first submitted, but after a time, he allied himself with Egypt and rebelled against Nebuchadnezzar. Thus the fourth time the Babylonians came against Jerusalem, and after a siege of 2-1/2 years, the city fell (588 BC). Nebuchadnezzar by this time had had enough of the rebellions of the kings of Judah, and he removed the house of David from being king over them. It looked as if the promise of God to David had failed … but God’s promises fail not. God was not done, and this was not the last act on the stage of world history for either Judah or the prince of the house of David …!