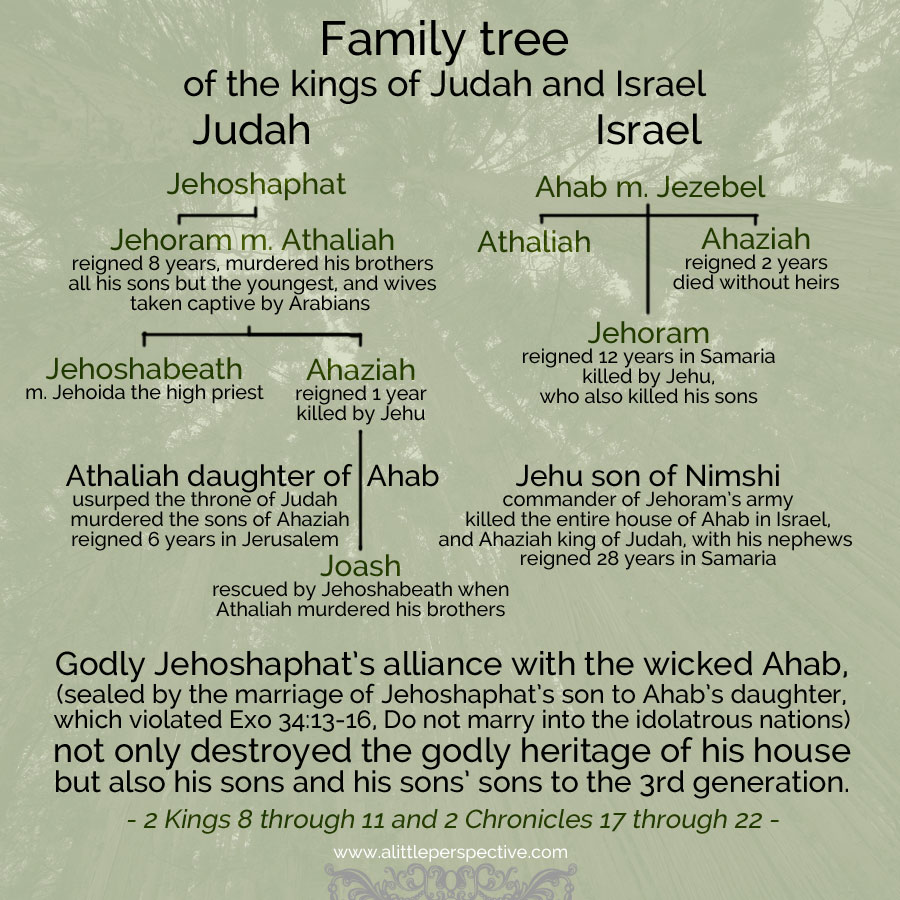 According to the International Standard Bible Encyclopedia:

“[There was] a war of rebellion in the days of Jehoram when Edom, after a fierce struggle, threw off the yoke of Judah (2Ki 8:20-22; 2Ch 21:8-10). Shortly after the revolt of Edom, according to 2Ch 21:16 f, the Philistines and Arabians broke into Judah, “and carried away all the substance that was found in the king’s house, and his sons also, and his wives; so that there was never a son left him, save Jehoahaz, the youngest of his sons.” Evidently the capital city fell into the hands of the invaders. It was a calamity of no mean proportions.”

Since Athaliah, the queen, was still living in Jerusalem as a widow in the days of the reign of her son, the wives of Jehoram who were carried away, must have been all his lessor wives and concubines, and not the queen.

1e) 2 Chr 22:5b, To war against Hazael king of Syria at Ramoth Gilead + the Syrians wounded Jehoram;

central axis) 2 Chr 22:6a, Then Jehoram returned to Jezreel to recover;

2e) 2 Chr 22:6b, From the wounds which he had received at Ramah, when he fought against Hazael king of Syria;

2d) 2 Chr 22:6c, Azariah the king of Judah went to see Jehoram the king of Israel in Jezreel;

1a) 2 Chr 22:7a, His going to Joram king of Israel was God’s occasion for Ahaziah’s downfall;
1b) 2 Chr 22:7b, For he went out with Jehoram against Jehu the son of Nimshi;
central axis) 2 Chr 22:7c-8, “Whom the Lord had anointed to cut off the house of Ahab. And it happened, when Jehu was executing judgment on the house of Ahab, and found the princes of Judah and the sons of Ahaziah’s brothers who served Ahaziah, that he killed them;”
2b) 2 Chr 22:9a, Ahaziah hid from Jehu the son of Nimshi/ when they caught him, they brought him to him;
2a) 2 Chr 22:9b, When they had killed Ahaziah, they buried him;

The enemy’s attack against the house of Judah, and the house of David, from whence would come the Messiah who was to crush his head, unfolds in this chapter. For several generations Israel had departed from the Lord and not returned. The idolatry sunk to a new low when Omri, king of Israel, married his son and heir Ahab to Jezebel, the princess of the house of Tyre. The Sidonians and Tyreans were Canaanites (but the Greeks called them Phoenicians) who worshiped Baal and Ashtoreth, and practiced the greatest depravities of paganism then existing in the world.

We never accomplish the will of the LORD by violating the word of the LORD! Jehoshaphat could not accomplish the reunification of the two kingdoms, as noble a cause as that is, by joining together the godly seed of his house with the ungodly seed of Ahab’s house. The result was a complete and utter failure: the seed of his house was completely destroyed, all but one little child, and a door opened for the enemy to work destruction and apostasy in Judah as he had been in Israel!

So Jehoram reigned in the place of his father, however, the righteous did not turn the heart of the wicked to righteousness, but the wicked turned the heart of the righteous to wickedness. Athaliah corrupted Jehoram (just as Solomon’s foreign wives had corrupted him) and he introduced all the evil of the house of Ahab into Judah. When he died, his son Ahaziah walked in his footsteps. Ahaziah was killed by Jehu according to the word of the LORD. Then his mother, the wicked Athaliah, proceeded to seize the throne of Judah also, and killed all Ahaziah’s young sons — her own grandchildren — in order to prevent any seed of the house of David from coming later to wrest the throne from her.

But as we will see in the reading later this week, although things did indeed look bleak for Judah, with the house of David destroyed, and the worship of idols exalted, and the Law of the Lord forsaken, things were not so dark that God could not redeem. The enemy’s triumph is soon to be turned to defeat …