But first, @realDonaldTrump said today that we all need to vote in person. I’ll show you him saying that, and then I’ll get into Space Force (USSF). 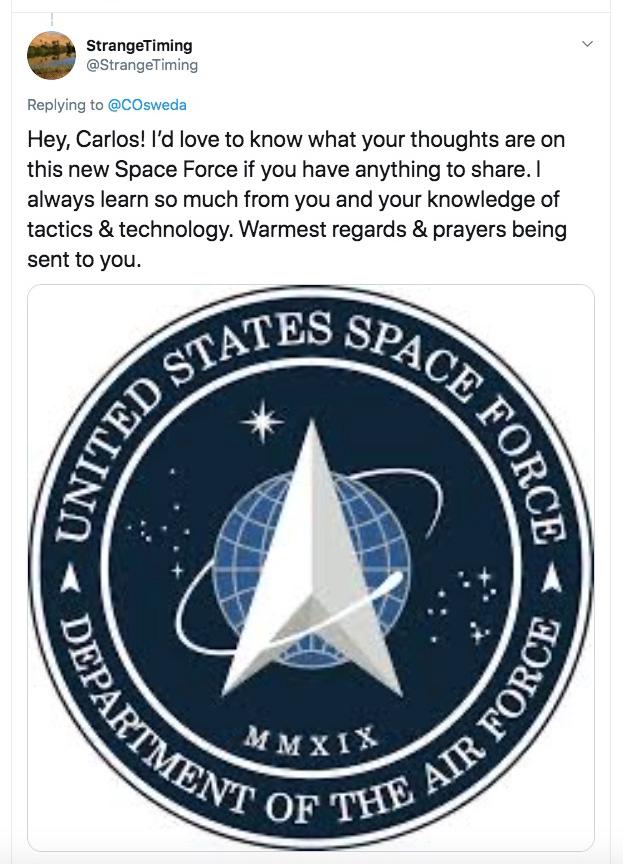 Today Orange County opened a used-car lot for EARLY IN-PERSON VOTING. Vote in person, or vote by absentee ballot delivered IN PERSON to the country registrar.

Idiots laugh at it. Guess what they don’t know? It was created on … September 1, 1982. Air Force Space Command (AFSPC). 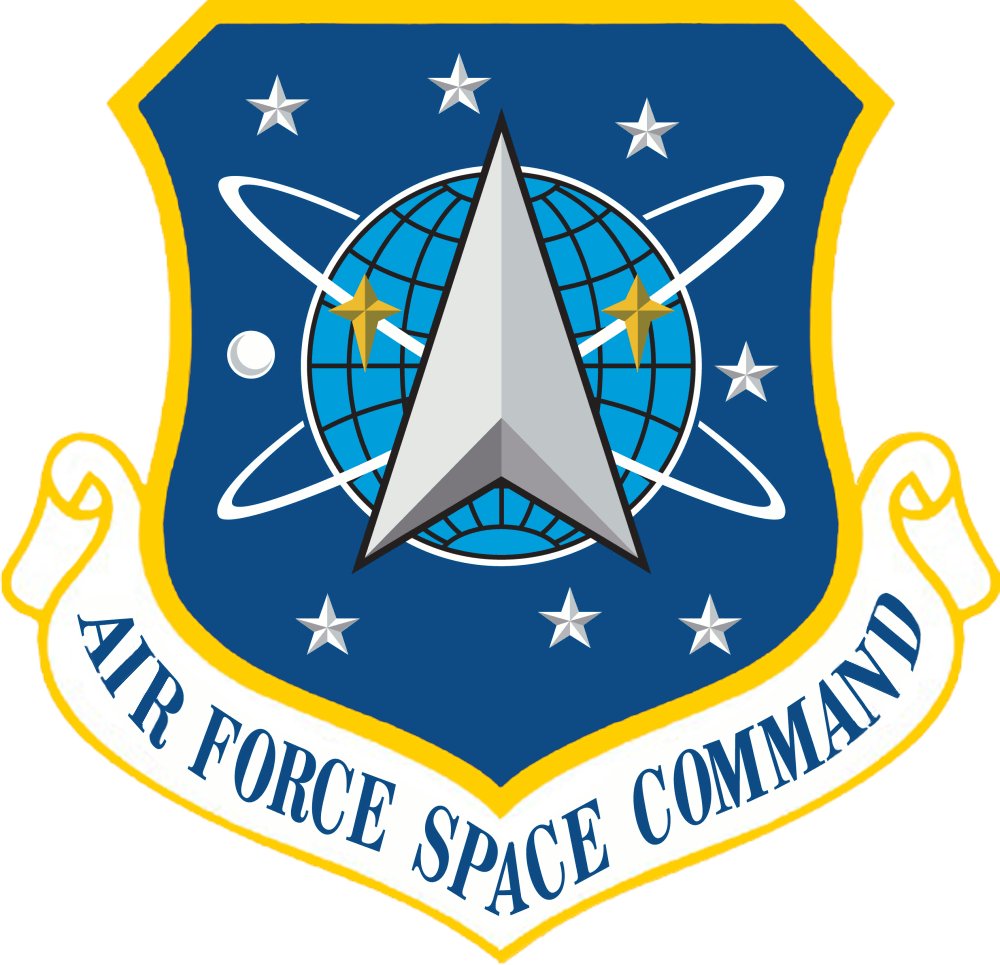 US Space Force became an INDEPENDENT BRANCH OF SERVICE on December 20, 2019.

The US Air Force (USAF) became an independent branch of service on September 18, 1947. Before THAT, it was the US Army Air Forces (USAAF).

The laughing idiots don’t see something that’s screaming, “HELLO?” right into their faces.

Why do PARTS of service branches become INDEPENDENT service branches? Because of massively expanded capabilities beyond the knowledge and training bases of the original service heads.

US Space Force has two functions:

To fulfill these two functions, the US Space Force has three duties:

AND THERE YOU HAVE IT. Three simple words: “Across all domains.” And THAT, my friends, means Rods From God and other forms of kinetic bombardment. Hypersonic munitions that are essentially guided meteorites.

Rods From God: A Space Weapon to Make Thor Jealous

People are BLIND. Rods From God have been used in combat. This is without question kinetic bombardment.

The way we know is that the debris towers rose FASTER than the fireball. 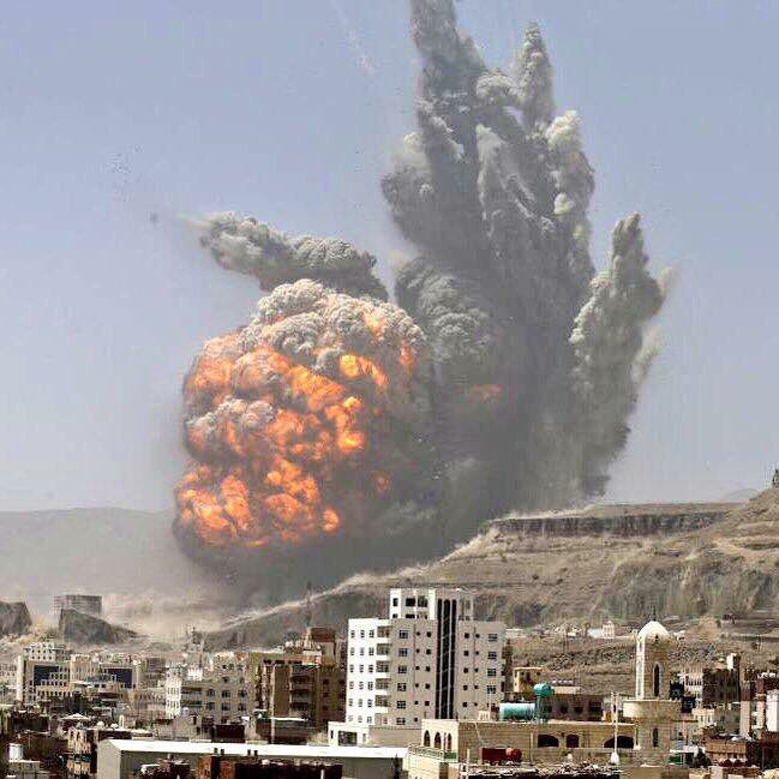 THIS is an underground weapon deport being destroyed with conventional munitions.

All the “sparkles” are warheads exploding. Fireball only, no debris towers. Debris towers rising FASTER than a fireball is the signature of kinetic bombardment. NO warhead on the munition. Pure kinetic energy transfer. 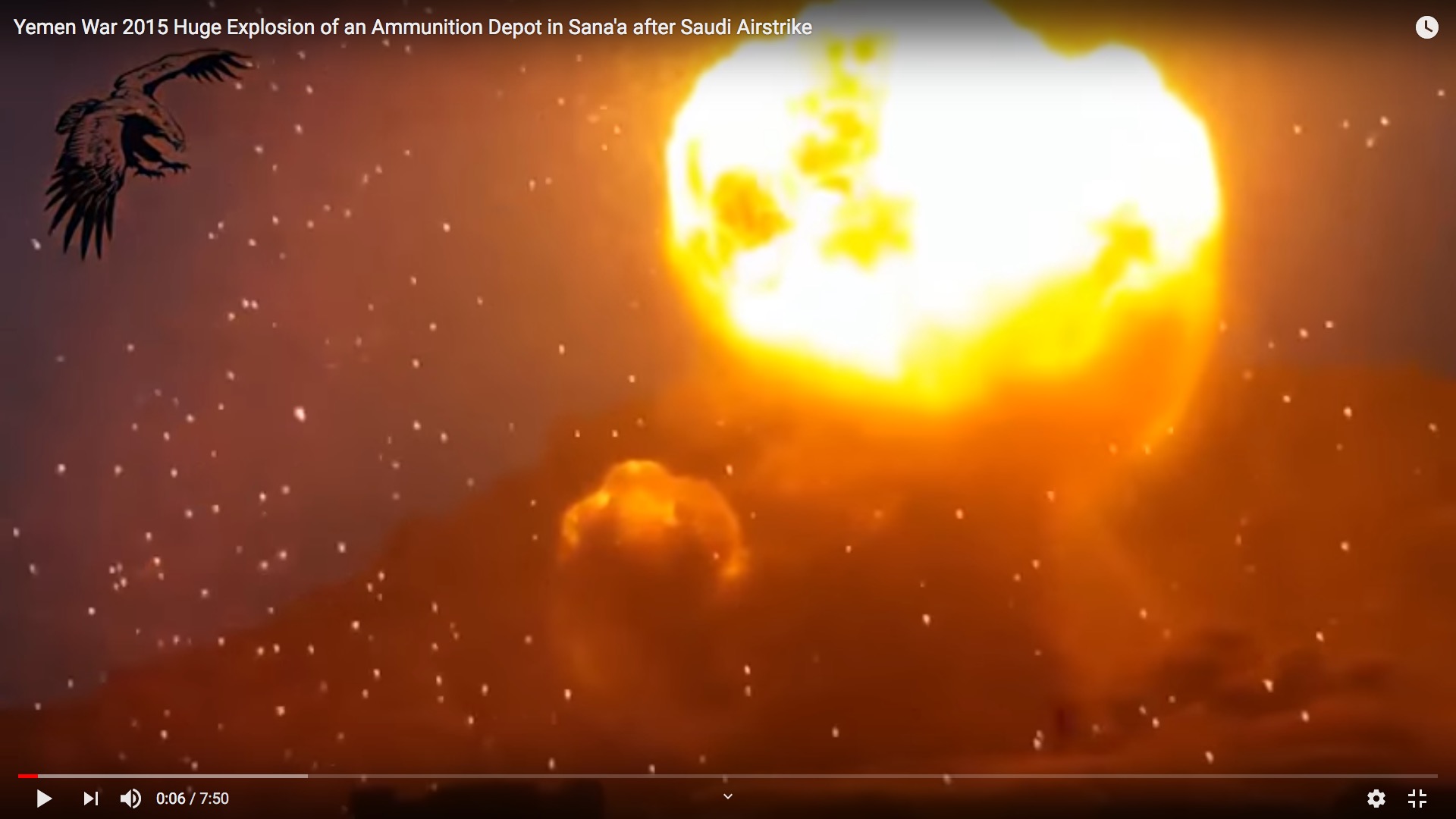 Note the sparkles at Faj Attan. The reason that there are far fewer is that the heat incinerated the warheads before they could even explode. 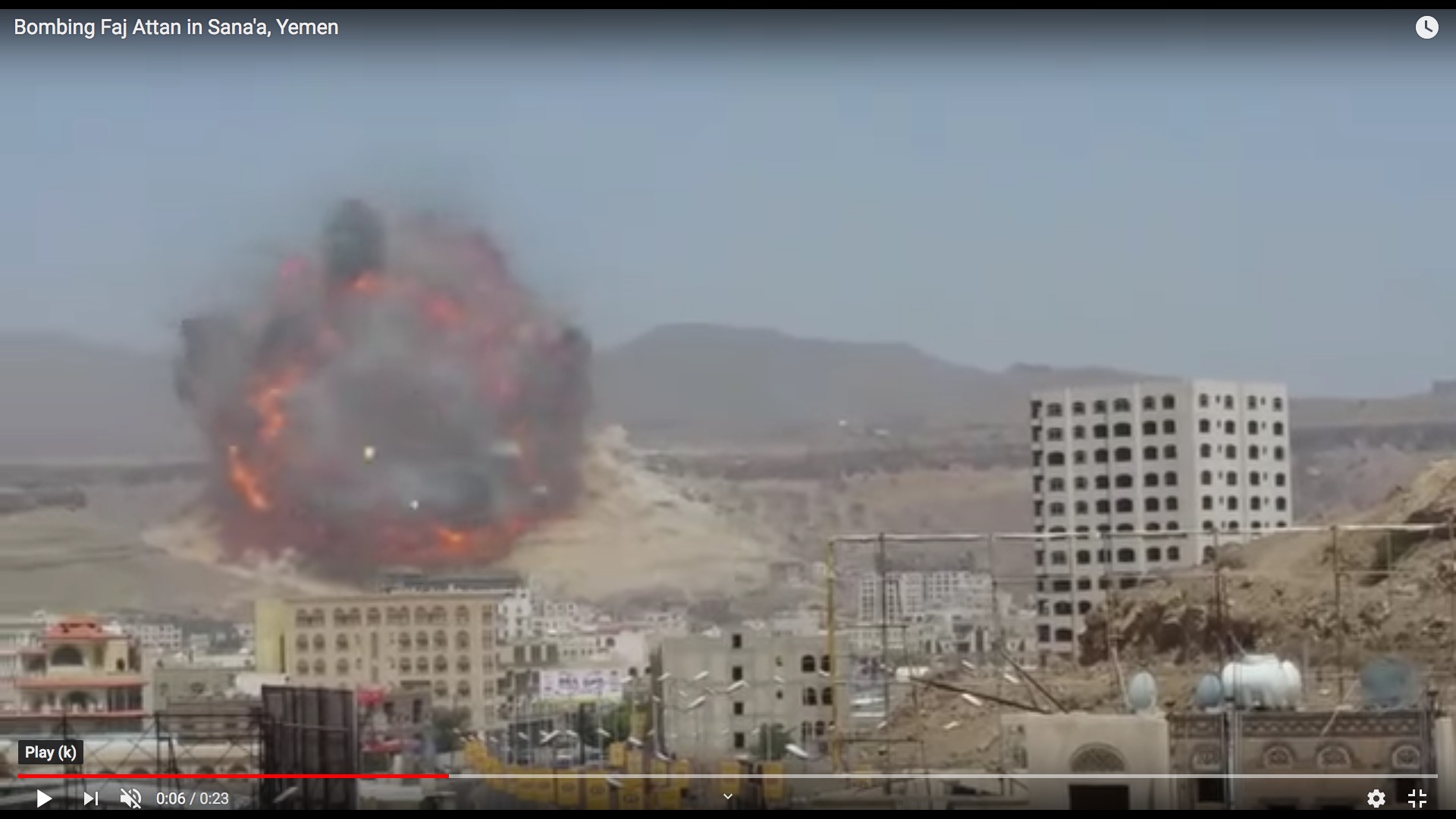 Now, at least 40 cameras were prepositioned to catch this explosion. That means A WARNING WAS GIVEN. There’s no other reason for so many cameras to be aimed at an empty hillside PRIOR to the first combat usage of Rods From God.

The Faj Attan explosion was on April 20, 2015. Hitler’s birthday. That was an Iranian weapon deport. This was a Gulf Arab gift to Israel for creating the designs that the Gulf Cooperation Council funded. The Gulf Arabs are now as technologically advanced as Israel.

And don’t warn me about anything. The Israelis have personnel stationed in Arab military headquarters, monitoring things. And there’s no doubt that the transparency is one-sided. The Israelis are not required to put Gulf Arabs in THEIR headquarters.

The Omani foreign minister had said publicly that it’s the responsibility of Arab country to prove THEMSELVES trustworthy to Israel, not the other way around.

In the next video, Air-Ground Control (as heard in another video) is a non-native speaker of English. We have an Arab speaking English to Control, and Control replying in English. On September 1, 2015, the only people fighting in Yemen–officially–were Arabs.

The Arab voice speaks to Air-Ground Control in English AND to Arab superiors in Arabic, and asks,

Arab: “There is no ammunition.”

Control: “No ammunition, no other, uh, balls, right?”

I’m told that the Arab superiors tell the Arab voice to fire the missiles because they won’t be wasted.

Since the Arab voice is repeating himself in both Arabic and English, and since his superiors give him the orders, Air-Ground Control is there in a technical capacity. My guess is he’s an Israeli. But he wasn’t engaging in combat.

We don’t know what Israeli air-ground control capabilities are. But the reason the Gulf Arabs and others are normalizing relations with Israel is that they TRUST the Israelis.

And WE benefit from all of this. People ask what we get out of our alliances with Israel.

Tulsi Gabbard said that the Saudis aren’t our real allies. She said we need to cut relations with Saudi Arabia and ally with … Bashar al-Assad.

You know why we never confronted Iran and Syria before?

Because the State Department said we needed them for the Middle East peace process. Both Republican and Democratic presidents followed that advice. Guess who paid for that folly with their lives and limbs? 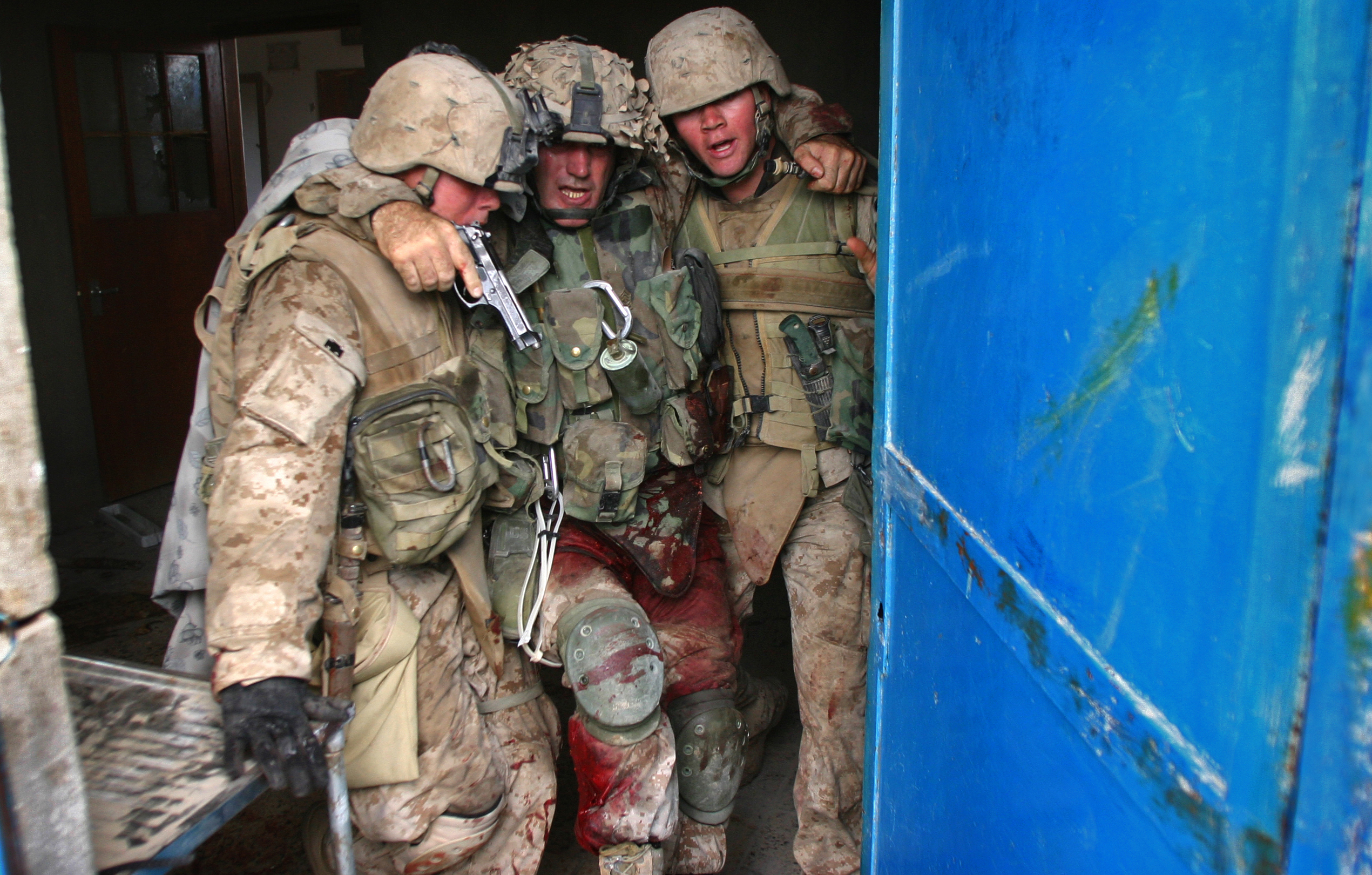 Syria and Iran are state sponsors of terrorism. Tulsi Gabbard — who claims to care about her “fellow troops” — says we should ally with the guy who had al-Qaeda training camps in his country to go into Iraq and kill Americans. Gabbard said Trump was leading us to war with Iran.

How anyone could support her is beyond me. It makes me puke that she calls herself a combat veteran. She was given the Combat Medic Badge as a participation award.

“…who satisfactorily perform medical duties while the unit is engaged in active ground combat, provided they are personally present and under fire.”

She was a HEADQUARTERS CLERK in C Company, 29th Brigade Support Battalion, Hawaii Army National Guard. Her company went with the 29th Infantry Brigade Combat Team to Iraq in 2004. She was stationed at the gigantic Anaconda Logistical Support Area. 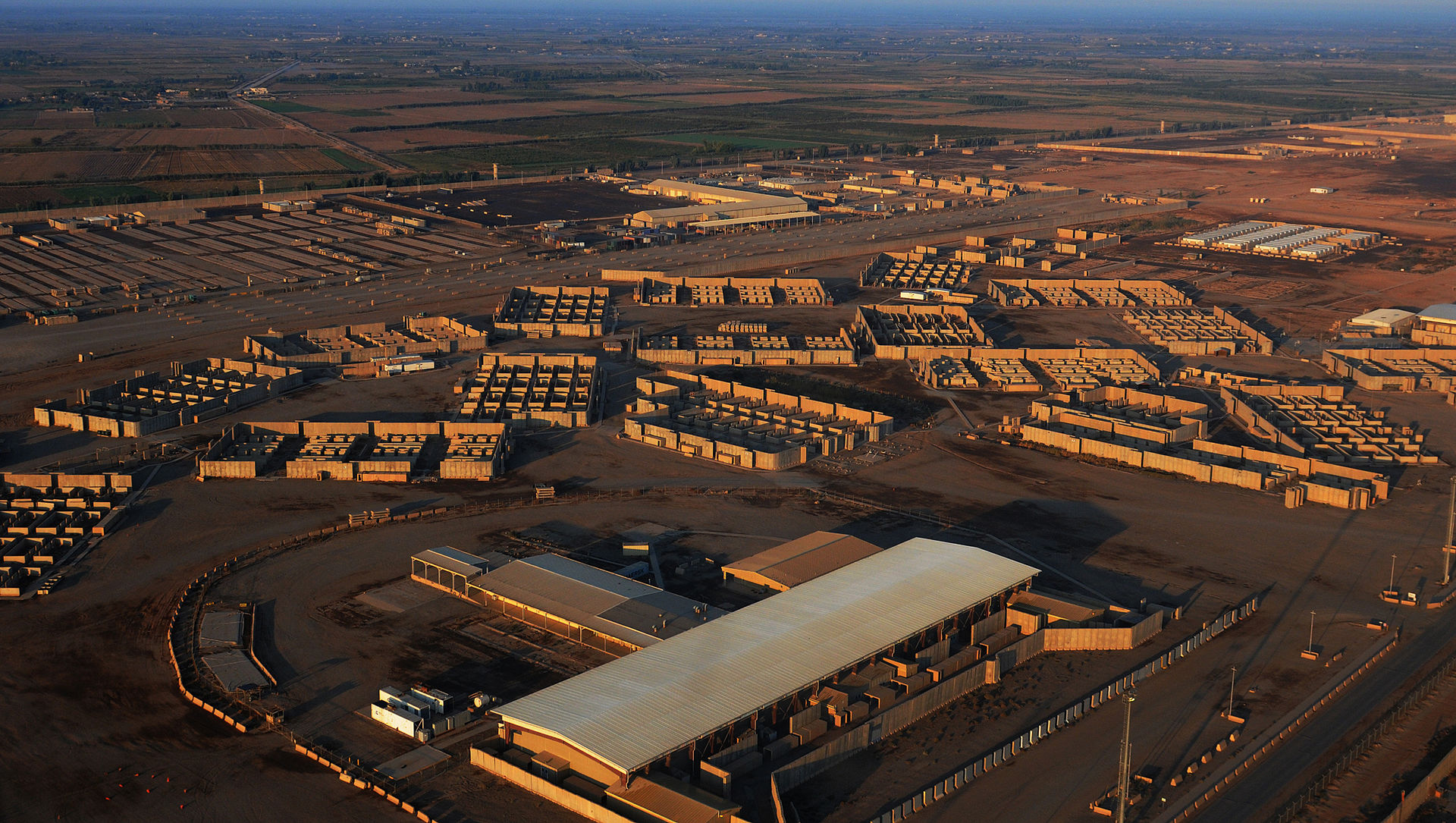 From 2003, insurgents fired several mortar rounds and rockets per day. They usually hit the empty space between the runways. I can’t find any evidence of Gabbard’s unit suffering any casualties during her time in Iraq, but I could be wrong.

When she was running for president, her people planted stories of her “legendary courage” going “outside the wire” on patrol. SHE WAS A CLERK. The point is, we dodged a bullet. She would’ve been YET ANOTHER Iranian agent in Washington.

I told everyone a long time ago that we would never go to war against Iran. And Qassem Soleimani was a one of the most savage terrorists of all time.

“At fifty, everyone has the face he deserves.” –George Orwell 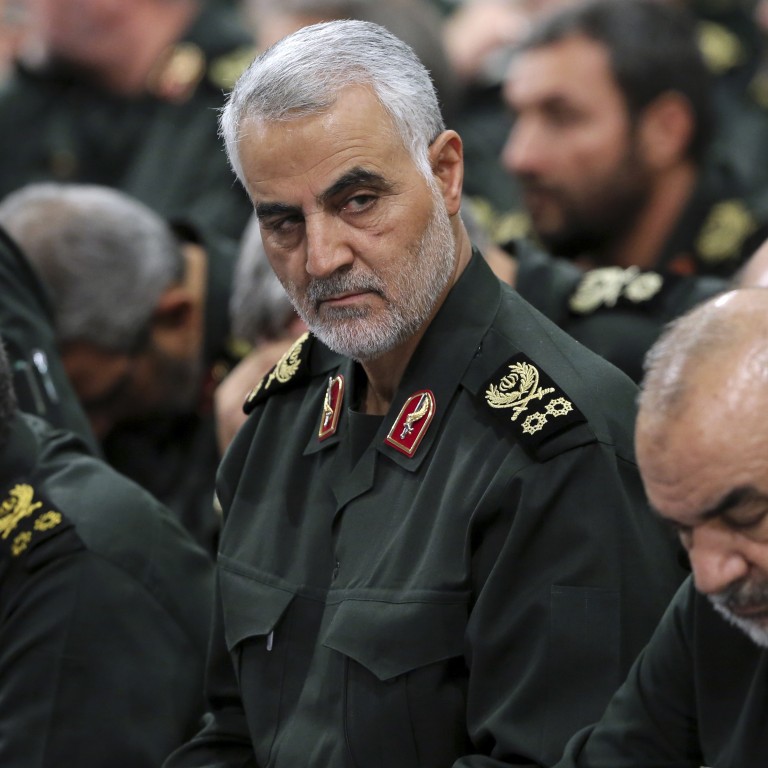 He LOOKED like a demon because he WAS a demon. Americans ENABLED Iran from 1979 onward.

Trump backed out of the fray and let the region take take of the problem. We helped when asked.

Among too many other things to count.

The Saudis aren’t our allies? They’re only the greatest allies we’ve ever had. Israel is a fine ally, but every now and then, leftists take over. The Saudis are totally consistent. And now they’re making mind-boggling changes.

Saudi Press calls for Islamic Reform and amendments in Quran

The Sunni Muslim “Vatican” is al-Azhar University in Cairo. Grand Imam Ahmed el-Tayeb had a meeting in SAUDI ARABIA with leaders of all the non-Abrahamic religions. This is technically prohibited in Islam. He did it anyway.

You know that best thing we can do?

Note it and not talk about it with Muslims. This is the most precarious moment in the history of Islam. THEY’RE GOING FOR IT. Everything you thought you knew about Islam was wrong. Watch it and don’t stick in your oar.

You DO NOT always have to SAY what you’re thinking. Let THEM work it out at THEIR speed, in THEIR way. We’ve being messing up the Middle East for centuries. It’s a new era of peace and the US Space Force. Thank Trump and Saudi Arabia. END