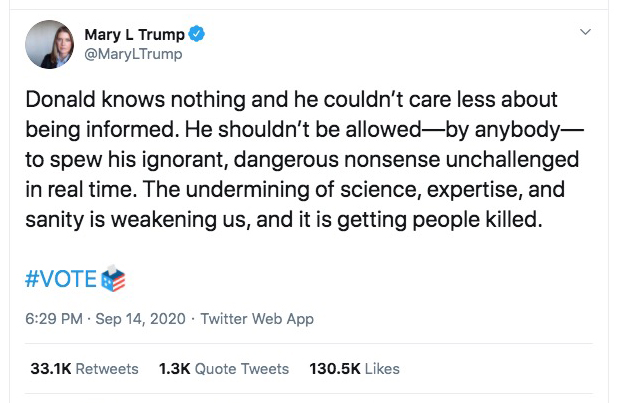 Thomas Dolby – She Blinded Me With Science

And failed me in biology

I can smell the chemicals

Blinding me with science

And failed me in geometry

I can hear machinery

Blinding me with science

And hit me with technology

Ain’t no such thing as “science.” There are only scientists. And scientists are only as good as their personal integrity. Leftists like Mary ignore or attack scientists with whom they disagree. Think about the Woodward book:

Trump told Woodward that COVID-19 was deadly, but he downplayed it in order to not cause a panic. What did we hear from Mary until the Woodward book excerpts were released?

(I’ll call HIM “Trump” and HER “Mary.”) Mary said all along that Trump didn’t take the pandemic seriously. NOW the argument is that he knew how serious it was but didn’t tell us. Trump spoke to Woodward on February 7, 2020. What did Saint Fauci say on the same day?

It was vital to NOT INCITE PANIC. Panic creates a shortage of resources. Mary is insane. The Democrats are insane. The press is insane.

WHICH scientists do we believe about “climate change”? I choose to believe the ones who tells us that anthropogenic–human caused–climate change is negligible, and making us all live in mud huts is not necessary.

GUESS WHAT I JUST HEARD ON THE RADIO?

Until the advent of firefighting in California, up to 12 percent of the state BURNED EVERY YEAR.

Ma Nature at work. She’s a merciless lady, ol’ Ma Nature. This was before the Industrial Age in the Americas.

What we’re seeing now is purely natural, NOT the result of anthropogenic climate change. I can’t even tell you what MOST scientists say about various social-sexual issues, because Twitter is so anti-science that I’d get suspended.

Where did Trump get the idea that COVID-19 was dangerous?

Sorry, Mary. He went with science.

And the SCIENCE KEEPS CHANGING. Scientists say, “OPEN THE SCHOOLS!” Why won’t leftists do it? Because they are ANTI-SCIENCE.

“Trump knows nothing,” says Bitter Mary. Really? Then what the hell is THIS?

You gotta know A TAD BIT in order to solve a problem that HAS STUMPED EVERY AMERICAN PRESIDENT SINCE 1918. Mary, riddle me this? How does your uncle stop rioting in major cities IN ONE NIGHT? 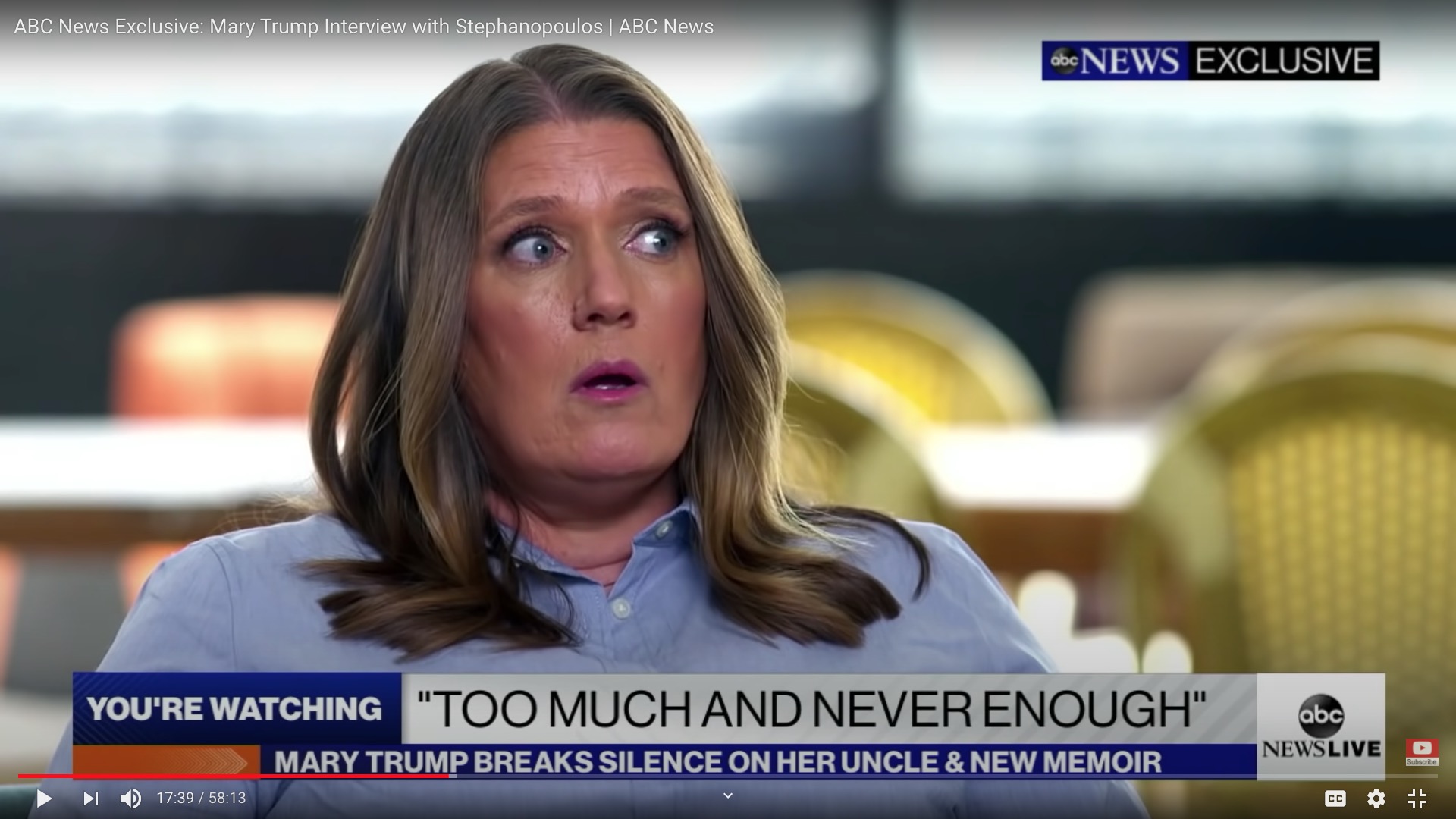 Mary, how is it that the economy rebounded so quickly after Democrat governors completely shut it down, and Democratic members of Congress tried to starve out the American people? 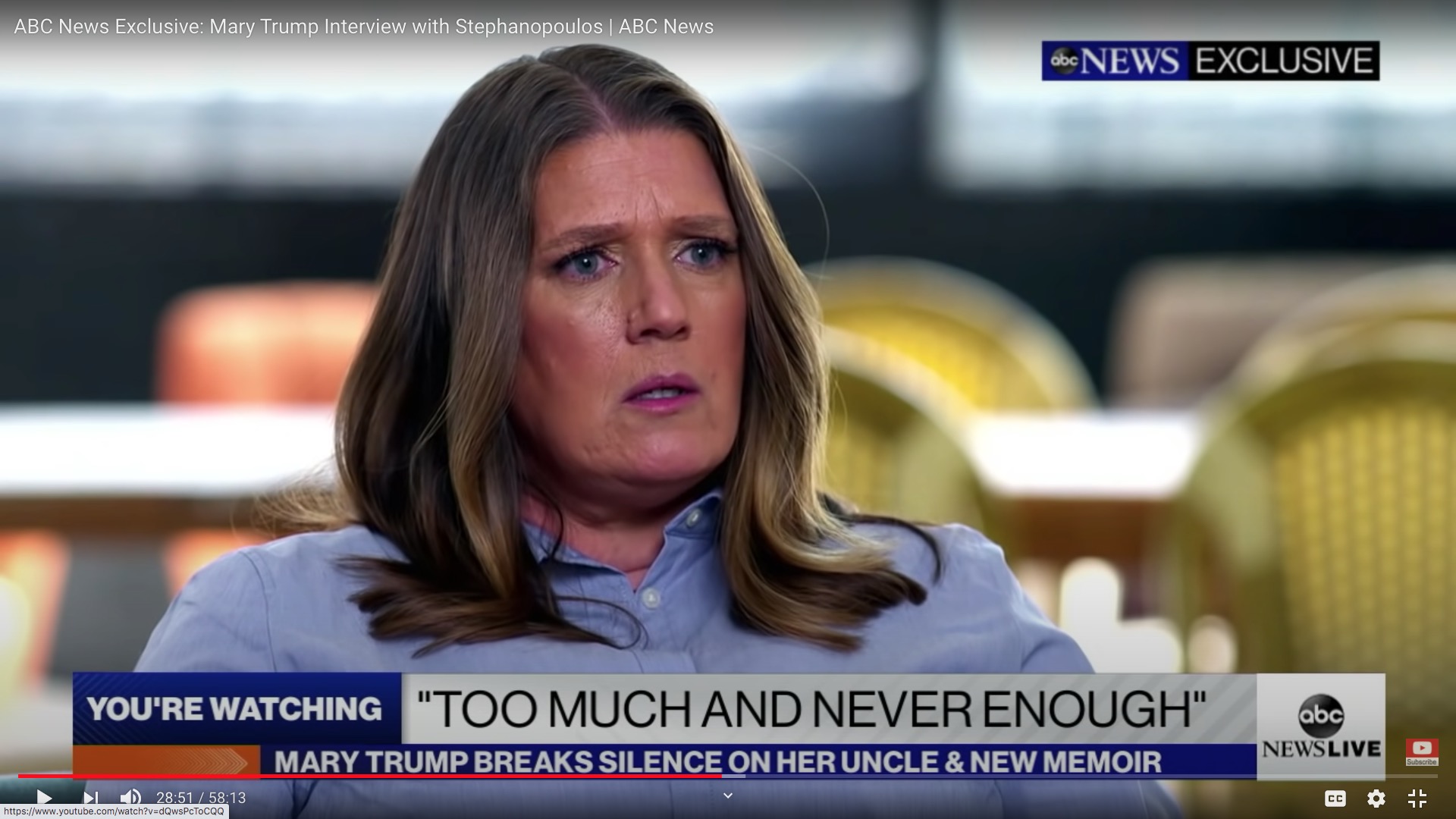 Yeah, that’s what I thought. Sister-girl, nobody sane cares about your blather. None of your accusations have any bearing on reality. We vote based on RESULTS. And Trump has DELIVERED. That can’t be argued.

Trump will be reelected in a landslide ON ELECTION NIGHT. And one final point: A whole bunch of loonies who just happen to be anti-leftist accuse me of “give people false hope.” What does that even mean?

You can’t ignore FACTS and tell me that I must listen to NONFACTUAL RAVING. By presenting FACTS and EXCLUDING NONFACTUAL RAVING, I’m “giving people false hope.” What diseased centrifuge of head-vomit could possibly think that’s logical? PISS OFF.

There was no toilet paper here for MONTHS because of panic. Trump listened to SCIENTISTS and didn’t spread panic.

I’ll tell you something else: Trump is hiding multiple realities from the press for strategic reasons. No, not BAD news. GOOD news. About the West Coast fires.

This is a WAR. The press are the ENEMY. Trump routinely DECEIVES THEM. I approve.

The press are by their own admission advocates and activists. Therefore they LOST THE PRIVILEGE of being spoken to with honesty. Trump fights to win. He poses no danger whatsoever to the country. In fact, without him, we’d be lost.

Roll up your sleeves, @RichardGrenell. We’re going to need YOU in 2024. If you want the job, you got it. Guaranteed. END

ADDENDUM: To clarify, I hope @RichardGrenell and  @VP Pence understand that I’m not dissing the VP. I think of him as co-president who’s putting in his eight years now. That’s why I don’t view him as a successor. He’s already president. Of course I’ll support him too.