You are here: Home / Bible Study / applied word / 12 scriptures when you are unsure God wants to use you

Previously: not a respecter of persons 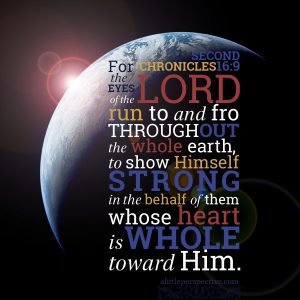 God loves everyone, wants everyone, will speak to everyone, and will use everyone, without prejudice … who likewise loves Him, wants Him, speaks to Him, and walks with Him. It hinges on us, not Him. He is looking for the man … any man or woman … whose heart is turned toward Him.

For the Lord your God is God of gods and Lord of lords, the great God, mighty and awesome, who shows no partiality nor takes a bribe. Deu 10:17

But the Lord said to Samuel, “Do not look at his appearance or at his physical stature, because I have refused him. For the Lord does not see as man sees; for man looks at the outward appearance, but the Lord looks at the heart.” 1 Sam 16:7

For the eyes of the Lord run to and fro throughout the whole earth, to show Himself strong on behalf of those whose heart is loyal to Him. 2 Chr 16:9

Yet He is not partial to princes,
Nor does He regard the rich more than the poor;
For they are all the work of His hands. Job 34:19

Behold, God is mighty, but despises no one;
He is mighty in strength of understanding. Job 36:5

And it shall come to pass, that whosoever shall call on the name of the Lord shall be delivered. Joel 2:32

“Whoever comes to Me, and hears My sayings and does them, I will show you whom he is like: He is like a man building a house, who dug deep and laid the foundation on the rock. And when the flood arose, the stream beat vehemently against that house, and could not shake it, for it was founded on the rock.” Luk 6:47-48

Then Peter opened his mouth and said: “In truth I perceive that God shows no partiality. But in every nation whoever fears Him and works righteousness is accepted by Him.” Act 10:34-35

For there is no partiality with God. Rom 2:11

And you, masters, do the same things to them, giving up threatening, knowing that your own Master also is in heaven, and there is no partiality with Him. Eph 6:9

But the wisdom that is from above is first pure, then peaceable, gentle, willing to yield, full of mercy and good fruits, without partiality and without hypocrisy. Jam 3:17