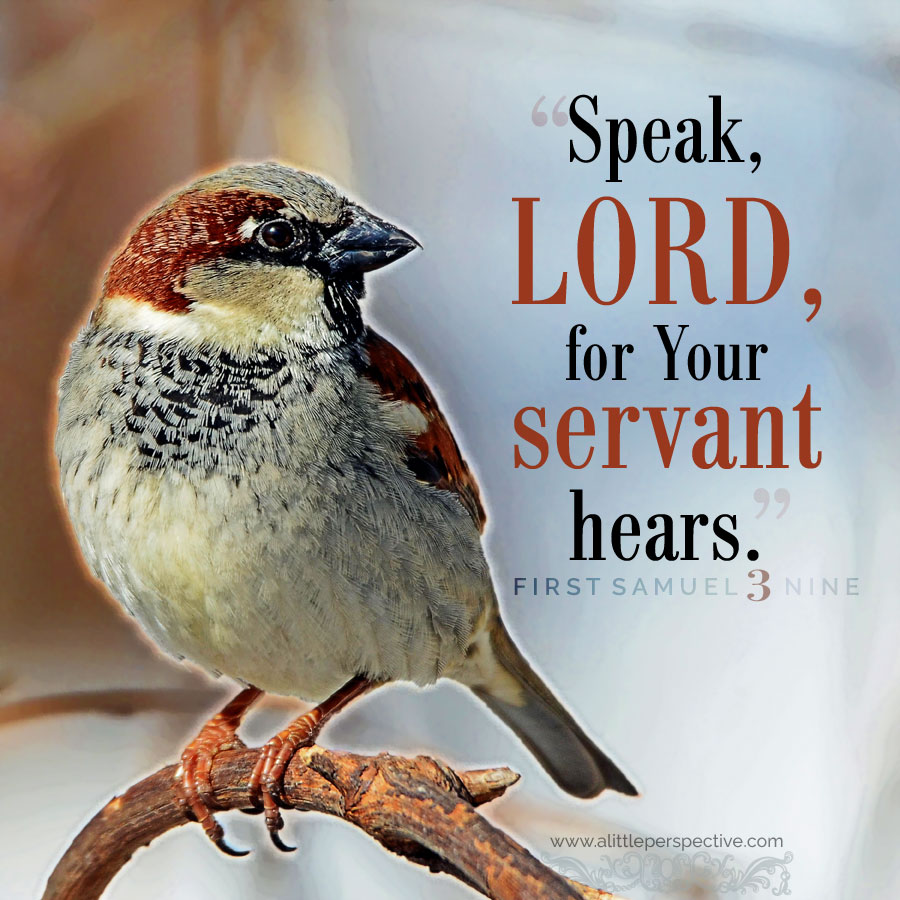 1 Samuel is a mass of chiastic structures, which I am working out:

central axis) 1 Sam 3:16-17, Then Eli called Samuel and said, “Samuel, my son!” He answered, “Here I am.” And he said, “What is the word that the LORD spoke to you? Please do not hide it from me. God do so to you, and more also, if you hide anything from me of all the things that He said to you;”

1 Sam 3 takes place while Samuel is still a boy. The word of the LORD was rare in those days before Samuel was called. He is really the first prophet since Moses and Joshua to act in that office.

When Samuel heard the voice of the LORD, it was so loud to his perception that he thought Eli had called him, although no one else heard anything. God is able to make His voice known and heard to His people. What if you don’t hear the LORD’s voice, but want to? I would follow Samuel’s example, and ask the LORD, with a submitted heart (for God opposes the proud, but gives grace to the humble, (Jam 4:6-8) to “Speak, LORD, for Your servant hears.” And then while you are waiting to hear, read the written Word of God and meditate on it, and do it, which is the definition of hearing (hearing so as to act) in Hebrew. The Word of God is God’s voice, written down. Jesus said, he who is faithful in a little, will also be faithful in much (Luk 16:10). So start with the voice of the LORD for every man written down and recorded in the Bible, and show the LORD that you are faithful to hear His voice and obey it. If you then do hear someone speaking to you, how will you know it is God? God will never say anything that contradicts His written word. Do you see how important it is to know what is in your Bible, front to back? It will preserve you from being deceived and led astray.

Then in 1 Sam 4, Samuel by this time is an adult. But Eli is still the high priest, and his sons were still in their office, in spite of all the warning that the LORD had sent to Eli. It seems that it was their hair- brained idea to bring the ark of God from the tabernacle to the battle, and Eli, once again, did not restrain them.

The first time Israel was defeated before the Philistines, and they asked the LORD why they had been defeated, do you notice that they did not listen for the answer (1 Sam 4:3)? They just assumed that they were defeated because they did not have the ark with them. In all previous times, no matter the battles Israel was facing, the ark stayed where it was supposed to be, in the Holy of Holies. But when Israel repented and their heart was right, God granted them victory over their enemies.

The things of God that belonged in the Tabernacle are not magic charms – but to those whose heart is far from the LORD, they might seem like such, as they did to the sons of Eli. God is not a tame lion! But, He is good, and all His judgments are just!