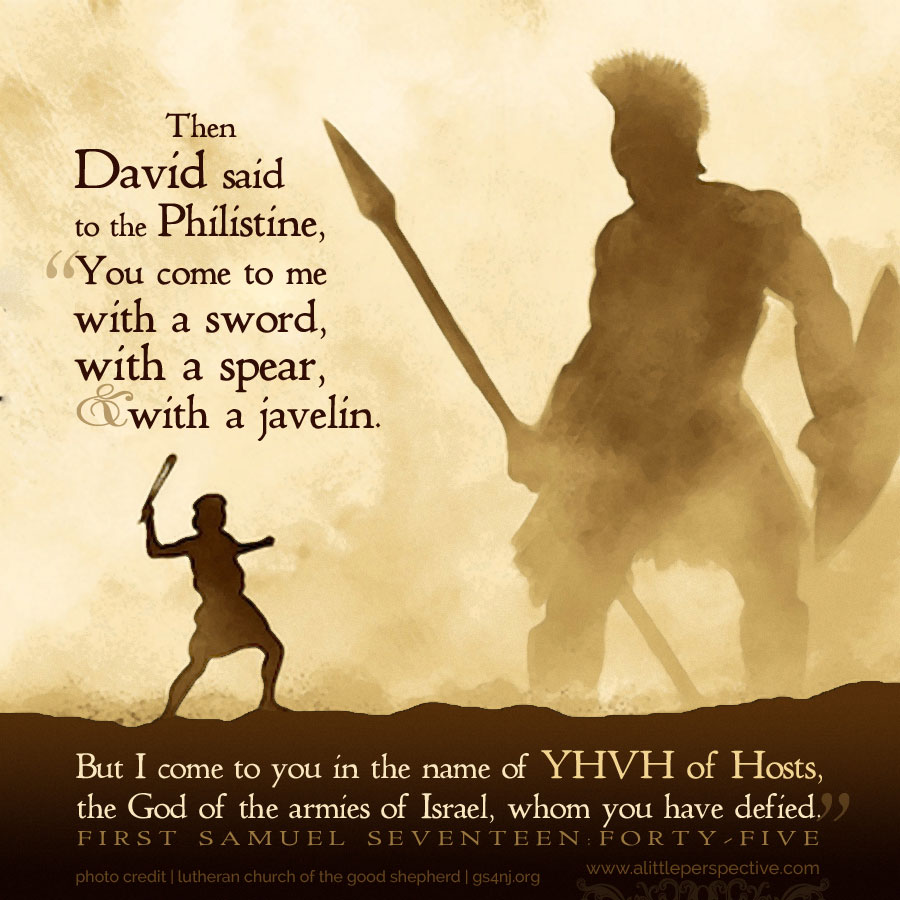 1a) 1 Sam 17:17-18, Jesse tasked David with bringing provisions for his brothers at the camp;
central axis) 1 Sam 17:19 {s} The men of Israel were in the Valley of Elah, fighting with the Philistines;
2a) 1 Sam 17:20a, David rose early, made provision for the sheep + went as Jesse had commanded him;

central axis) 1 Sam 17:45, Then David said to the Philistine, “You come to me with a sword, with a spear, and with a javelin. But I come to you in the name of YHVH of hosts, the God of the armies of Israel, whom you have defied;”

2f) 1 Sam 17:46, David’s prophecy: YHVH will deliver you into my hand/ Philistines food for the birds + beasts;

central axis) 1 Sam 17:58b, So David answered, “I am the son of your servant Jesse the Bethlehemite;”

Goliath, the champion of the Philistines, “a man of war from his youth,” standing at 9 ft. 6 in. tall, fully armored and weaponed, is contrasted with David, who becomes the champion of the Israelites, a youth of normal height, with no armor and no weapons but his shepherd’s sling. Truly, the arm of flesh fails when the battle is the LORD’s. David’s faith in the covenant with the LORD God plays a central role. Why does he keep referring to Goliath as “this uncircumcised Philistine?” The giant, no matter how big he was, was not in covenant with the LORD God, Creator of heaven and earth, as David and all Israel was. Apparently David was the only Israelite who remembered the significance of Abraham’s covenant.

The three oldest sons of Jesse are likewise contrasted with the youngest son of Jesse. The oldest sons had left their elderly father and followed Saul and the army. Hmmm. David, the youngest son, kept the care of his father’s concerns, even after Saul tapped him to play his harp and soothe him. He went back and forth from his father to Saul. It is not so strange that Saul didn’t remember whose son David was. I am sure the harp-player was just thought of as another servant, whose personal details Saul did not care to know.

Furthermore, the oldest sons, especially Eliab the firstborn, were rather proud of their soldierly life, and he disdained David for keeping the sheep, which it seems he thought a cowardly career. However, for all his exalted estimation of himself and his bravado, he did not confront Goliath for the 40 days the giant had been challenging Israel. The first day David arrived in camp, and the first day he heard the giant’s taunts, that was the day of the giant’s death at David’s hands. This must the LORD’s way of saying, watch what you esteem and what you despise!

The structure of the 2nd element in the 2a pair is my first encounter with such. The central axis’ within the structure pair, and become the narrative elements from which the structure is made.

Chapter 18 seems to be showing how David’s family is exchanged, but not from his own agency. He went from doing his father’s bidding to doing Saul’s bidding, since Saul no longer allowed him to return home. Saul became his new father (-in-law, however, a dangerous one as he sought David’s life). His brother Eliab despised him, but his new brother-in-law Jonathan loved him as his own soul, and no wonder; Jonathan and David were two peas in a pod in their strong faith in the LORD God of Israel. ♥