You are here: Home / Perspective / government and economics / 1 samuel 13 and 14 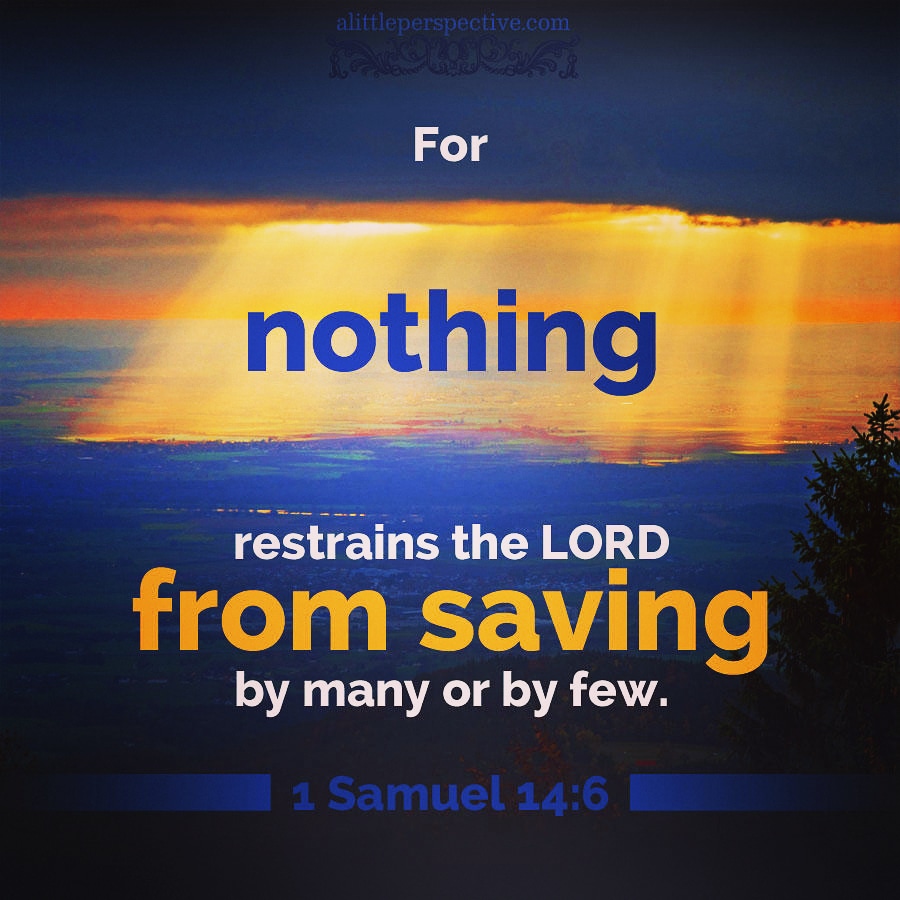 These are the strong themes of 1 Samuel, since Israel started yearning for a king:

So this is what I learned this morning: God raised up and equipped the right person for the job of leading the nation: Samuel. Eli and his sons revealed that they were not right for the job, because Eli did not have the same characteristic as Abraham:

And the Lord said, “Shall I hide from Abraham what I am doing, since Abraham shall surely become a great and mighty nation, and all the nations of the earth shall be blessed in him? For I have known him, in order that he may command his children and his household after him, that they keep the way of the Lord, to do righteousness and justice, that the Lord may bring to Abraham what He has spoken to him.” Gen 18:17-19

Abraham commanded his children and his household after him, to keep the way of the LORD. He exercised his authority as head of the household. This is exactly what feminists hate about patriarchy, but its proper exercise is a great blessing and a gift to those under it (so don’t be afraid, fathers! Rise up, O men of God, and acquit ye like men!).

So then during all the days of Samuel, the Philistines were defeated.

But then Samuel’s sons did not walk in his ways, and Israel asked Samuel to give them a king. The same men who despised the LORD as king over Israel, despised Saul as king over Israel. Some people are never happy, even with good and perfect gifts! Trying to curry the favor of such people is a waste of time!

The strong theme from 1 Sam 13:1-14:12a is interesting. As I was considering it, I realized the narrative is highlighting the impatience and rashness of Saul. It is another way of saying that Saul did not trust in the LORD. It takes trust to wait on the LORD, doesn’t it? Anxiety and fear compels you to rush headlong before the LORD has revealed His counsel.

But then, the rashness of Saul is contrasted with the simple faith and trust of Jonathan. The nation did not have weapons of war, but Jonathan’s faith in the LORD was so strong, that he knew God did not need an army armed with weapons of war to bring about a great deliverance. And God did bring about a great deliverance, through Jonathan, side-stepping Saul.

Saul did not learn the lesson of Jephthah’s rash oath, but made two rash oaths the day of the battle: 1) that no man should taste food until all of Saul’s enemies were defeated, and 2) that the man who tasted food would surely die, even if it was Jonathan. Neither of these oaths came to pass, for the people intervened and saved Jonathan from certain death. This is a Scriptural precedent for the authority held within the people, which is even greater than the authority of the (false) prophet or the (disobedient or rash) king. (See Deu 18:20-22, where the LORD commands the people to remove from office the one who proves he is false).

However, the kingship of Israel is a type prophesying of Messiah Yeshua, thus,

And he gathered an army and attacked the Amalekites, and delivered Israel from the hands of those who plundered them. 1 Sam 14:48

We have seen previously that the LORD would have war with Amalek forever, because they were a prophetic type of the unrighteous seed who resist the LORD and His righteousness all their days. “Amalekites” exist in every generation who try to plunder the LORD’s people, but in Messiah Yeshua we are delivered from their hands!