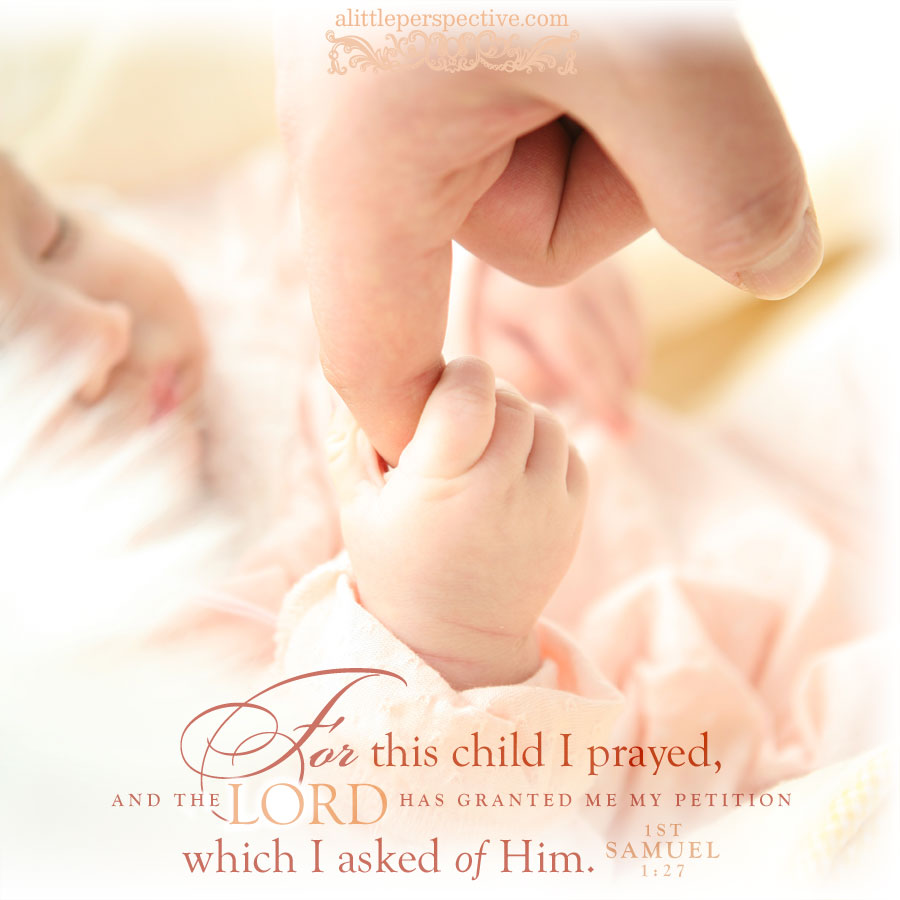 With the birth of Samuel, we have yet another mother who was barren, who conceived a son by the supernatural intervention of the LORD. All of the sons who have followed this pattern before in Scripture, have been types of Messiah, and the barrenness of their mothers have been prophecies prophesying of the supernatural birth of Yeshua our Messiah: Sarah and Isaac; Rebekah and Jacob; Rachel and Joseph; the woman of Dan and Samson. And now, Hannah and Samuel.

The first part of 1 Samuel 1 forms a chiastic structure:

The central axis is Hannah’s vow to the LORD, that her son will be given to the LORD all the days of his life, and no razor shall come upon his head. She was making the vow of a Nazirite for Samuel, one who is not of the priesthood but who is consecrated or set apart to the LORD (Num 6). Samson, another Messiah type, was also a Nazirite from his mother’s womb.

There are so many thematic connections between Samuel and Samson, that it makes me wonder if Samuel obtained the calling and ministry that Samson was to have had, that he did not complete, because his weakness of the flesh caused his downfall.

Once Samuel was weaned, his parents gave him to Eli the high priest, in order to lend him to the LORD as long as he lived. So Samuel ministered to the LORD, it says, even as a child, wearing a linen ephod (1 Sam 2:18). The ephod is a garment of the priesthood, and the one who wore it heard the voice of the LORD. I am not sure how all that worked, but ephods were connected with the priesthood and with hearing God’s voice. The ephod is mentioned twice in the book of Judges, where images of ephods were made and became idols, so perhaps in the days when every man did what was right in his own eyes, the people thought that they would have special favor from the LORD if they had an ephod as a symbol of hearing His voice (Jud 8:27, 17:5).

Samuel is being introduced as a type of Messiah, by his supernatural birth, by his consecration as a Nazirite, and by his ministering to the LORD from childhood. Another clue is:

And the child Samuel grew in stature, and in favor both with the LORD and men. 1 Sam 2:26

And Jesus increased in wisdom and stature, and in favor with God and men. Luk 2:52

By thematic analysis, Scripture is linking the childhood of Samuel with the childhood of Jesus, in order to reveal that Samuel is a type of Messiah. What is interesting about Samuel, is that he ministered before the LORD, wearing a linen ephod, but he was not of the house of Aaron or Levi. Scripture is painting a picture of him as priest, and yet not of the Levitical priesthood, whose priests, it is revealed to us today, were also subject to sin in need of a Savior. The man of God prophesied to Eli:

“Then I will raise up for Myself a faithful priest who shall do according to what is in My heart and in My mind. I will build him a sure house, and he shall walk before My anointed forever.” I Sam 2:35

In Deuteronomy, Moses prophesied of a Prophet like him (faithful in all God’s house, Num 12:7) who would be raised up, Deu 18:18. Now we are seeing the prophecy of a Priest who would faithful in all His house. This is a prophecy of Yeshua our High Priest, who is not of the Levitical priesthood, and yet who is faithful in all the LORD’s house as a Son (Heb 3:1-6).