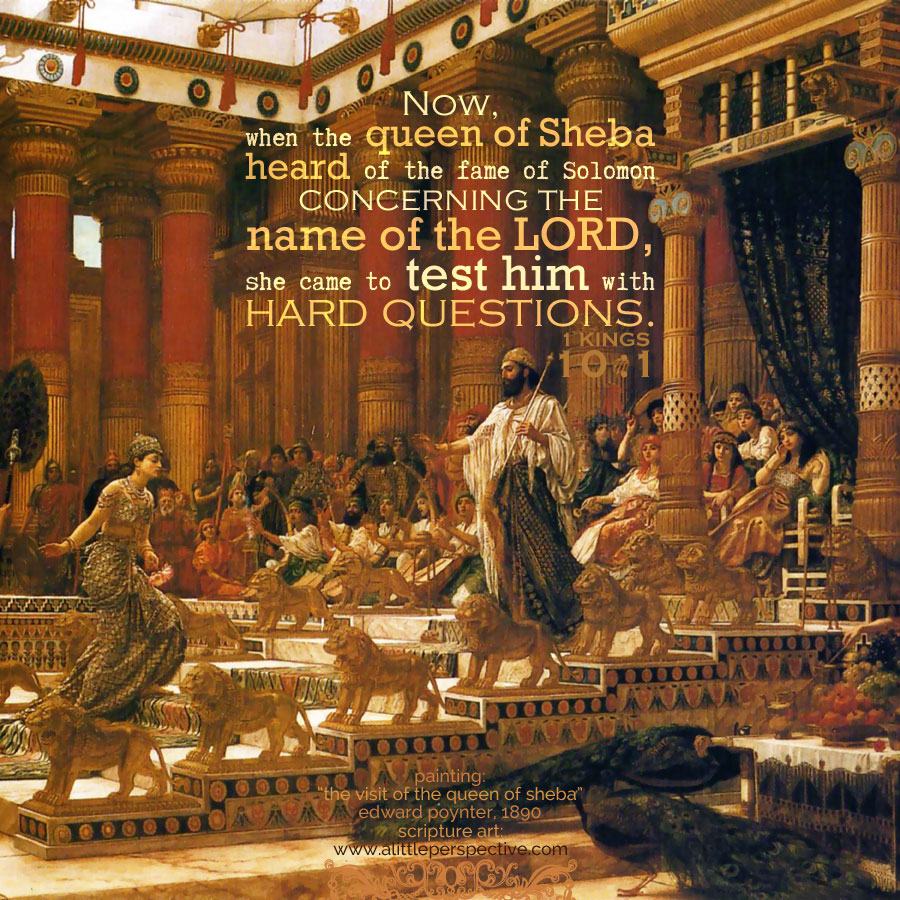 The 1 Kin 10:1-13 paragraph forms its own chiastic structure, with the following as the central axis:

central axis) 1 Kin 10:18-20, The glory of Solomon’s throne, unlike anything seen in any other kingdom;

1 Kin 10:23, So King Solomon surpassed all the kings of the earth in riches and wisdom.

1 Kin 10:23 is an out- of- place verse, which leads me to believe it is an element of an even greater structure, still waiting to be uncovered – for there are no truly out- of- place verses in Scripture! But it is telling us, that King Solomon was the greatest king who ever ruled in the ancient world – something you will never hear on the Discovery Channel, even though it is true. Ancient history today is taught as if Israel was not even a blip on the radar screen, even though Israel under Solomon surpassed the glory of all other kingdoms and empires of the ancient world.

Isn’t it interesting that the amount of gold which came into Solomon’s coffers every year was 666 talents of gold. A talent is equal to 1000 denarii. A denarius was one day’s wage for a laborer. So I figured that in today’s money a denarius would be roughly $80.00 ($10/hr x 8 hours), or 1 talent would equal $80,000.00. That is 80 thousand dollars. 666 talents, then, would equal $53,280,000.00 — 53 million dollars per year in gold, with silver as common as stones in the street, and not counting precious jewels and other valuable treasures which were continually brought to him.

666 is the number of the beast (Rev 13:18). It says there that it is the number of a man. Solomon is a prophetic type of Messiah Yeshua in His glorious reign as King of kings and Lord of lords, which is coming. So what is Scripture telling us? I am not sure I am wise enough to answer that question, but perhaps it has something to do the LORD’s second warning to Solomon, to keep His commandments. This came after twenty years, after the building of the temple and Solomon’s palace was finished. By that time all the glory and wealth which today’s reading records had come upon Solomon; thus the warning. Scripture records in many places, warnings of what wealth can do to a person, even if their heart is right at first:

“But those who desire to be rich fall into temptation and a snare, and into many foolish and harmful lusts which drown men in destruction and perdition. For the love of money is a root of all kinds of evil, for which some have strayed from the faith in their greediness, and pierced themselves through with many sorrows.” 1 Tim 6:9-10

“When you come to the land which the LORD your God is giving you, and possess it and dwell in it, and say, ‘I will set a king over me like all the nations that  are  around me,’ you shall surely set a king over you whom the LORD your God chooses; one from among your brethren you shall set as king over you; you may not set a foreigner over you, who is not your brother. But he shall not multiply horses for himself, nor cause the people to return to Egypt to multiply horses, for the LORD has said to you, ‘You shall not return that way again.’ Neither shall he multiply wives for himself, lest his heart turn away; nor shall he greatly multiply silver and gold for himself.“Also it shall be, when he sits on the throne of his kingdom, that he shall write for himself a copy of this law in a book, from the one before the priests, the Levites. And it shall be with him, and he shall read it all the days of his life, that he may learn to fear the LORD his God and be careful to observe all the words of this law and these statutes,  that his heart may not be lifted above his brethren, that he may not turn aside from the commandment to the right hand or to the left, and that he may prolong his days in his kingdom, he and his children in the midst of Israel.” Deu 17:14-20

The king shall not multiply horses, nor wives, nor silver and gold for himself; and he shall meditate in His law all the days of his life, that he may not turn aside from the Lord. Solomon is in danger, as we will see …