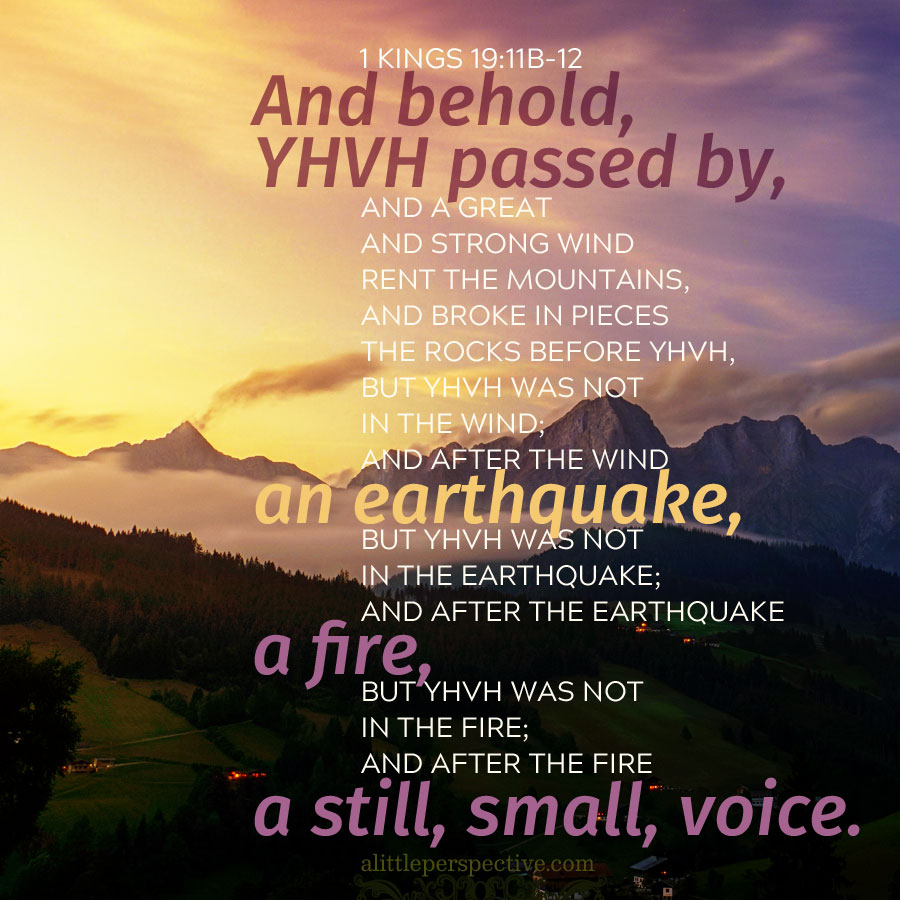 The complex chiastic structure incorporates the one for 1 Kin 17-18 that was posted yesterday:

1a) 1 Kin 19:15b-16, “Anoint Hazael king over Syria/ Jehu king over Israel/ Elisha prophet in your place;”
central axis) 1 Kin 19:17-18, “And it shall be, that whoever escapes the sword of Hazael, Jehu will kill; and whoever escapes the sword of Jehu, Elisha will kill. Yet I have reserved seven thousand in Israel, all whose knees have not bowed to Baal, and every mouth that has not kissed him;”
2a) 1 Kin 19:19-21 {p} He departed from there, found Elisha/ he followed him + became his servant;

I puzzled over the strong theme of 1 Kin 18:1-19:21, the account of the drought, the great victory over Baal, and the threat of Jezebel, from which Elijah ran to Horeb, the same mountain which is alternately called Sinai, where Moses received the Ten Commandments written on the two tablets of stone. What is the common strong theme? But as I meditated on it, I realized that perhaps Elijah expected that the great signs he performed: calling for the drought at the word of YHVH, ending the drought at the word of YHVH, and the miraculous consumption of the bull on the altar by fire from heaven, would convince Israel, Ahab, and Jezebel that Baal was a false idol, and YHVH alone is God. He was expecting a great revival and restoration of Israel back to the LORD God as a result! (Who wouldn’t?)

It did convince the children of Israel; they killed all the false prophets of Baal. I think it might have even convinced Ahab, because after this incident, all of the sudden you see the prophets of YHVH free to come and go into and out of the presence of the king, and the king giving heed to their word.

However, it did not convince Jezebel. The significance of the victory of YHVH over Baal on Mt Carmel completely went over her head, and she threatened Elijah’s life, with the same phrase that Ben-Hadad king of Syria later repeats, “May the gods do so to me, and more also, if I do not __insert threat here__.”

It scared Elijah, because it was Jezebel who previously had all the prophets of YHVH massacred, except for the 100 that Obadiah hid in a cave. I think it discouraged him too, as it seemed to him that all the effort of his life and ministry, and the glory given to the name of Yehovah because of it, did not make a drop of difference in the long run. So he went a day’s journey into the wilderness, to die.

The Lord met him, and strengthened his body, and encouraged his heart, and gave him a new mission, and hope for the end of the tyranny of Jezebel and the rule of the false idols: anoint Hazael king over Syria, and Jehu king over Israel, and Elisha as prophet in your place. Those (of the idol worshipers of Israel) who escape from Hazael will fall into Jehu’s hands; and those who escape from Jehu’s hands will fall into Elisha’s hands. So Elijah had hope, and continued on.

This morning it spoke to me, that it doesn’t matter what fruit you do or do not see at the end of your life: if you walk in the Lord’s ways and spend your life as He has called you, you will have done well, for the Lord knows the end from the beginning, and will ultimately prevail. ♥