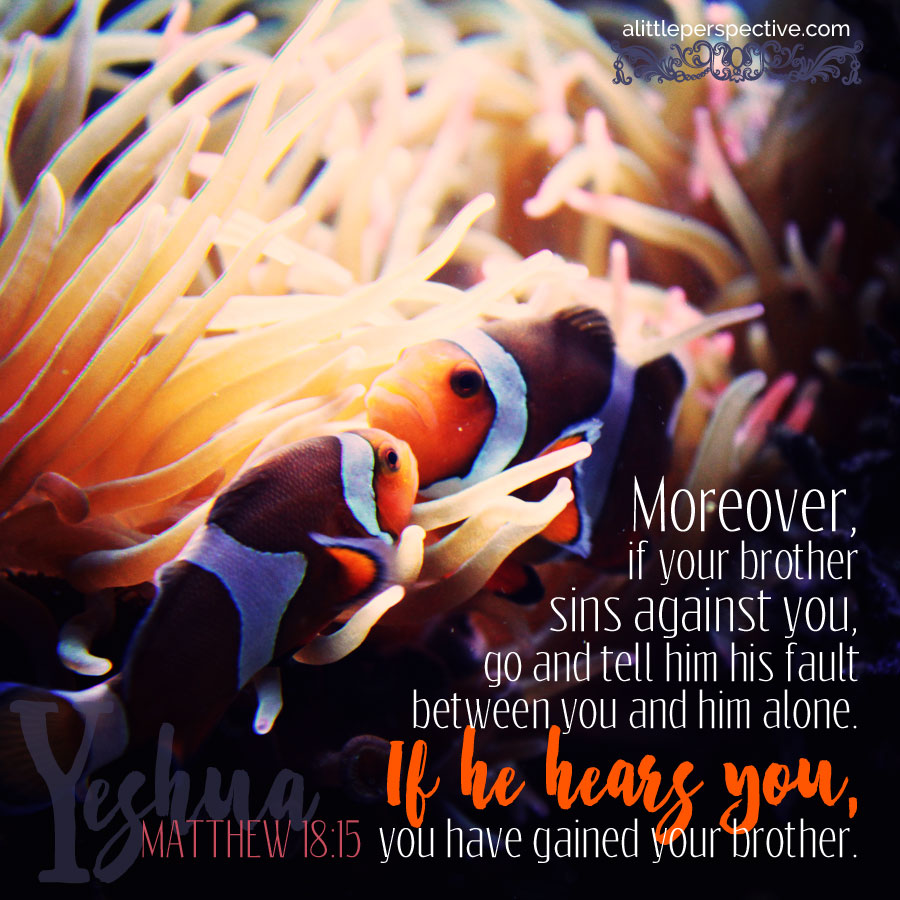 “But with me it is a very small thing that I should be judged by you or by a human court. In fact, I do not even judge myself. For I know of nothing against myself, yet I am not justified by this; but He who judges me is the Lord. Therefore judge nothing before the time, until the Lord comes, who will both bring to light the hidden things of darkness and reveal the counsels of the hearts. Then each one’s praise will come from God.” 1 Cor 4:3-5

“For I indeed, as absent in body but present in spirit, have already judged (as though I were present) him who has so done this deed.” 1 Cor 5:3

What we are to judge is the actions of the body (1 Cor 5:3). Behavior, deeds. Not the heart, not thoughts, but deeds. And not just the deeds of everyone. The unbelievers are outside, and not only are we not to judge them, but we (adults) are to associate with them, so that the world might be saved by our witness!

“Moreover if your brother sins against you, go and tell him his fault between you and him alone. If he hears you, you have gained your brother. But if he will not hear, take with you one or two more, that ‘by the mouth of two or three witnesses every word may be established.’ And if he refuses to hear them, tell it to the church. But if he refuses even to hear the church, let him be to you like a heathen and a tax collector.” Mat 18:15-17

What are sins? The things already defined in Scripture as unrighteousness. Jesus and Paul and all the apostles used Torah to define what was righteous and unrighteous deeds or sinful behavior. The Torah is the dictionary of righteousness for the Scriptures. Jesus tells us the process we go through if a brother sins, before we refuse to even eat with such a one. But if the brother refuses all correction, then Jesus agrees that we should avoid that brother and not eat with him. Paul left out the process of bringing the brother to correction, but it is implied of the brother in Corinth whom Paul had judged, that he had been corrected already.

What does Paul mean when he says he delivers that brother to Satan for the destruction of the flesh? (vs. 5). I have no idea. I assume this is something he taught the churches that he established. But see how serious a thing it was in the church, to allow sin to grow unchecked! Ananias and Sapphira died before the Lord for lying to Peter (Act 5:1-11)! This man was expelled from the church for not heeding correction and repenting! And not only was he expelled, but his flesh was delivered to Satan for destruction, whatever that means! Sin is a destructive agent which we are not to take lightly, as both the Old and New Testament teaches! Would that we had the heart of the LORD on these matters, and saw these things as vitally important as Jesus and the apostles did!

But why is it so important for the unrepentant brother to be expelled from the church? Because, Paul says, a little leaven leavens the whole lump (vs. 6). Leave a little bit of sin in the church, and it spreads until the entire church is leavened with sin. This is a spiritual principle that cannot be wished away just because it isn’t politically correct in our day to judge anyone for anything!

« go about doing good
blessed be the name of the Lord »