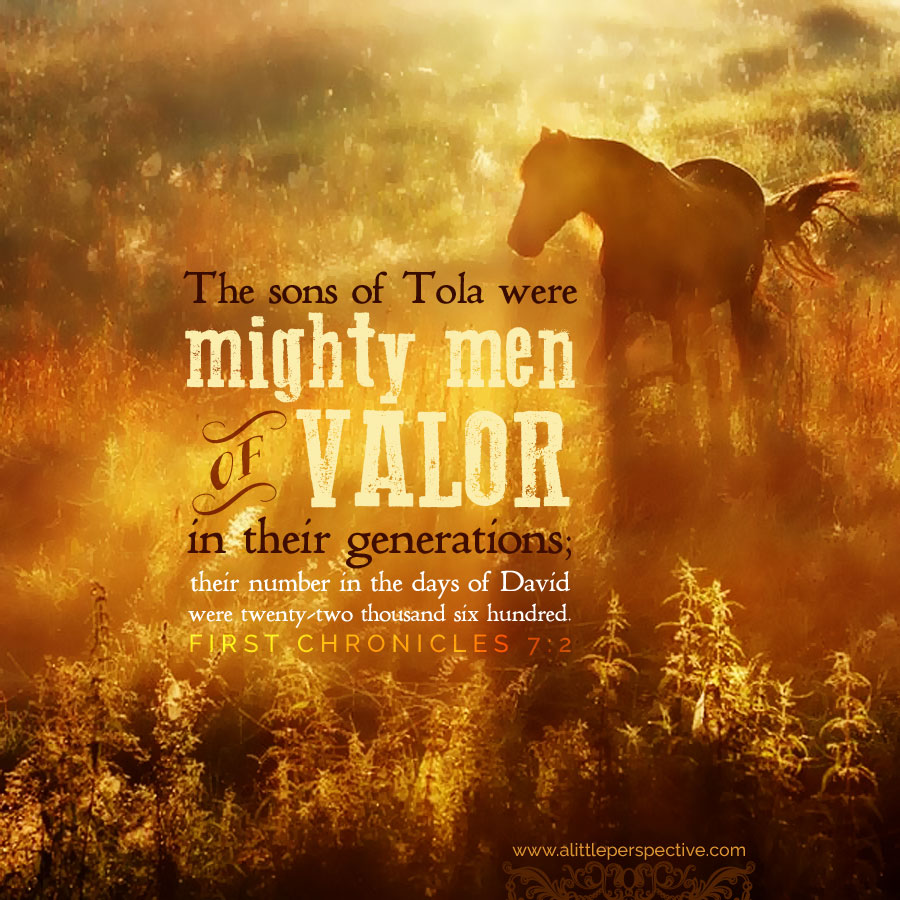 Read 1 Chronicles 7 and 8 at Bible Gateway.

Manasseh and Ephraim were also set apart to receive the blessing of the firstborn in Gen 48 — in this way Joseph received the double inheritance of the firstborn, when his sons were elevated to receive an inheritance with the sons of Israel. We will see the highlight on Judah and Joseph continue throughout Scripture, and I will continue to point it out, because it becomes significant to prophecy, as we will see.

But the highlight on Manasseh and Ephraim caused me to look closely at their paragraphs. There is a puzzle, because the text lists three sons for Ephraim: Shuthelah, Ezer, and Elead. (The Hebrew for that passage is clearer: 1 Chr 7:20-21, The sons of Ephraim were Shuthelah, (Bered his son, Tahath his son, Eladah his son, Tahath his son, Zabad his son, Shuthelah his son), and Ezer and Elead.) Apparently these three were killed by the men of Gath when they made a raid on them for their cattle. Here is the puzzle: Ephraim the son of Joseph was born in Egypt, and so were his sons. Joshua was the first of the line to enter the Promised Land, so how is it that his ancestors were killed by men of Gath, who were Philistines, as we have seen reading Judges and Samuel?

These are the puzzles that cause the unthinking to reject the Word of God as full of errors. But if we begin knowing that its historical statements are factual, something amazing is revealed.

The beginning of 1 Chronicles recounts some of the Table of Nations from Gen 10:

Mizraim is a plural noun, and is the Hebrew word translated “Egypt” throughout our English Bibles. The names of his sons, Ludim, Anamim, and so on, are likewise all plural. An English translation might be, “The Mizrites begot the Ludites, the Anamites, the Lehabites …” I only recognize one name on the list: Ludim, the peoples whom the ancient writers associate with the kingdom of Lydia, which Cyrus of Persia conquered and enfolded into the Persian Empire (Lydia was in Asia Minor at the time). So we see that many ancient nations near to the Mediterranean Sea came from Egypt.

Gath was a town settled by the Philistines, in David’s day. Goliath came from this place, and David served the king of Gath one year and 4 months when Saul would not desist seeking his life. So the men of Gath, were Philistines. But the men of Gath who were born in the land were the ones who killed the sons of Ephraim. Born in what land? In the land of Egypt. The English assigns the article “that” to the land, making it emphatic for the land of Gath; but in the Hebrew, it reads simply, “who were born in the land.” (Don’t ask me why the translators translate it as they do. The school of textual criticism — this belief that the ancient text must be improved upon — has done harm to the clear text of the Bible).

So, someone might ask, why isn’t the connection made more clear in the text, if that is the case? This is actually an argument in favor of the statement that Ezra made, “The records are ancient,” (1 Chr 4:22). Ezra was a scribe. They had such regard for the word of God, that the scribes were the exact opposite of the school of textual criticism. They did not change one dot or tittle in order to make things more clear. Back in the ancient days when the records and history were first recorded, these things were common knowledge. To explain that the men, who were born in Egypt, killed the sons of Ephraim, and then later migrated to Gath, would be stating a redundancy. If the Old Testament was really thrown together by late writers with an agenda to prove, as the critics maintain, the explanations inserted into the ancient records would abound.

Now, one last note. Ephraim, who had three sons, was now childless, even if the eldest had left behind a son of his own. But his wife bore him a new son, whom he named Beriah, for tragedy had come upon his house. But “Beriah” is Strong’s H1283, meaning “gift.” What an amazing attitude Ephraim had, that saw his son Beriah as a gift from the LORD’s hand, after the tribulations of this life had taken his other sons from him! And isn’t that often the way? The tragedy and sorrow that we experience in this life, opens within us, if we will let it, a deep well of gratitude and appreciation for all that we do have, as gifts from the hand of the LORD.