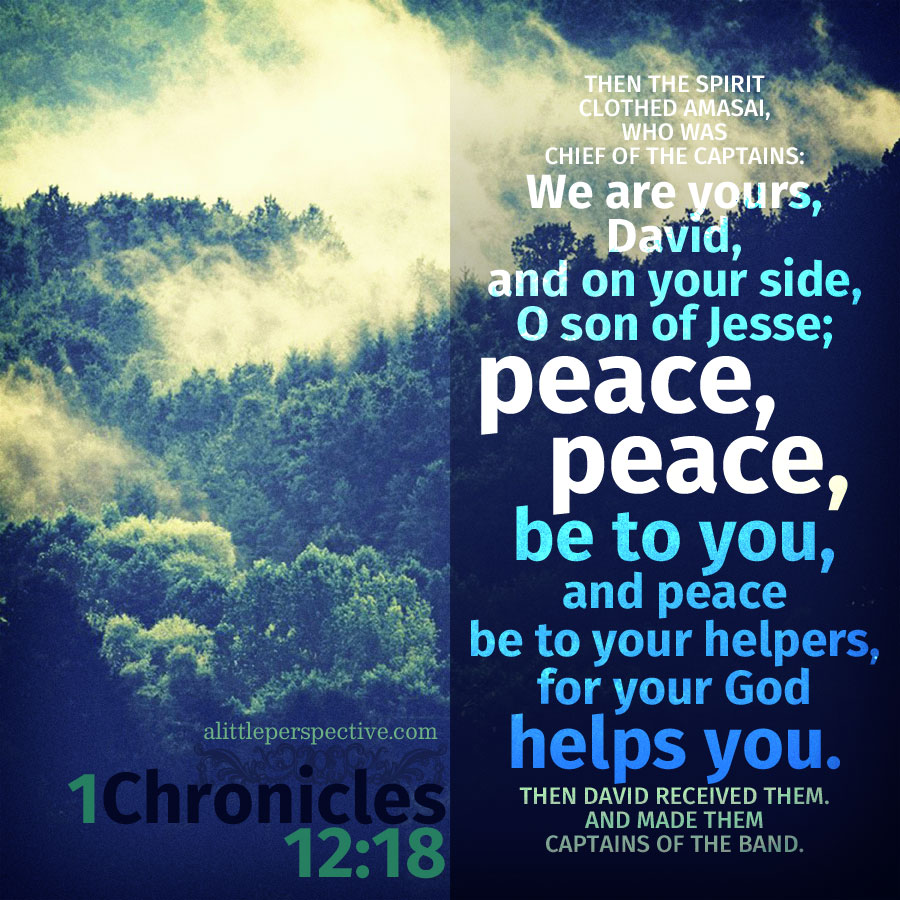 The strong themes of these two chapters revealed the chiastic structure:

central axis) 1 Chr 12:16-18 {s+p} “Then some of the sons of Benjamin and Judah came to David at the stronghold. And David went out to meet them, and answered and said to them, ‘If you have come peaceably to me to help me, my heart will be united with you; but if to betray me to my enemies, since there is no wrong in my hands, may the God of our fathers look and bring judgment.’ Then the Spirit came upon Amasai, chief of the captains, and he said: ‘We are yours, O David; We are on your side, O son of Jesse! Peace, peace to you, And peace to your helpers! For your God helps you.’ So David received them, and made them captains of the troop;”

We have just finished reading about David’s kingdom in 2 Samuel. Now we will read about it again in 1 Chronicles. 1-2 Samuel, 1-2 Kings, and 1-2 Chronicles all tell the same history: the history of the kings of Israel and Judah. 1-2 Samuel and 1-2 Kings was the official history kept by Samuel, and continued by David’s court once Samuel was gone, and the subsequent kings of Judah and Israel.

1-2 Chronicles was a record kept, most probably, by the priests or Levites, since in Chronicles there is an emphasis on spiritual matters rather than just political matters.

It may be that as the priests and Levites saw the kingdom divide, and the kings go down to idolatry, that they feared that the official record of the kings would become corrupted and the truth of what the kings were doing and what God was doing might be lost. So it is possible they began to keep a record of the history of Judah and Israel themselves, to serve as a corrector, or counter balance, if necessary, to the official history. When the Jews returned to Jerusalem after the Babylonian captivity under the leadership of Ezra, he collected the records and set them in their present form. He was a Levite, a scribe, and a teacher of the Law, and it was Ezra who organized synagogues in every town, with a schedule for reading from the Torah and the Prophets every Sabbath, so that Israel would learn the Torah and never fall back into idolatry again.

Chronicles tends to uphold the righteousness of the line of David, as the rightful ruler of Israel, and minimizes the kings of Israel.

Present in Samuel-Kings, absent in Chronicles:

1. David’s early life
2. David’s kingdom in Hebron
3. David’s adultery
4. Amnon and Tamar
5. Absalom’s revolt
6. Solomon’s apostasy
7. The kings and history of the Northern Kingdom, for the most part

Present in Chronicles, absent in Samuel-Kings:

1. David’s preparation for building the temple
2. David numbers and distributes the Levites
3. David arranges the singers, players and temple ritual
4. David prepares for temple officers
5. The war between Abijah and Jeroboam
6. The reform of Manasseh
7. The Passover of Josiah
8. Extra genealogical materials

So as we go through the repeats of history, I will not repeat what I have already said, unless new details revealed take us in a new direction. ♥